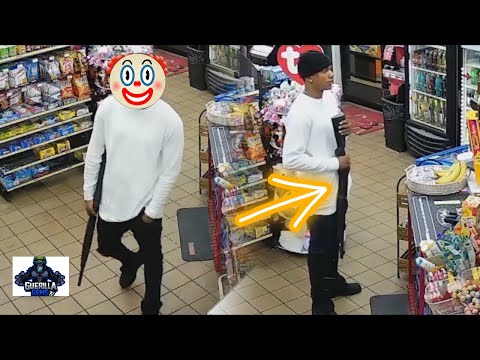 A would-be robber was forced to flee a Florida convenience store after the store clerk pulled out his own gun, according to police.

Thirty-two-year-old Rakim Stephen Tate made a “bad decision [that] became a worse decision” on Sept. 9 when he attempted to rob a convenience store with a shotgun, the Escambia County Police Department said.

Tate walked into the store with the shotgun “close to his side” before looking around. “At this time, he doesn’t notice anyone behind the counter … so he watches and waits,” police said.

A store employee had already observed Tate arming himself before he entered the store, prompting the employee to head to a back room to retrieve his personal firearm, police said.

Tate was confronted by the employee and then tried to explain himself, saying he was from Chicago and stumbling over his words.

“I don’t mean no harm, I’m just not from around here,” Tate told the employee, noting he had a “big ass gun” on him. Tate is then seen on surveillance footage leaving the store.

“Words seem to fail you when your felony attempt is thwarted by lawful and righteous force,” the Escambia Police Department wrote in their post. “Thankfully, he decides that it is not the time for a robbery, and he slowly exits the store.”

Tate was arrested several days later in Santa Rosa County and was charged with openly carrying a prohibited weapon and attempted robbery with a firearm, according to police.

“You’re not in Chicago anymore; you’re under arrest,” police said.