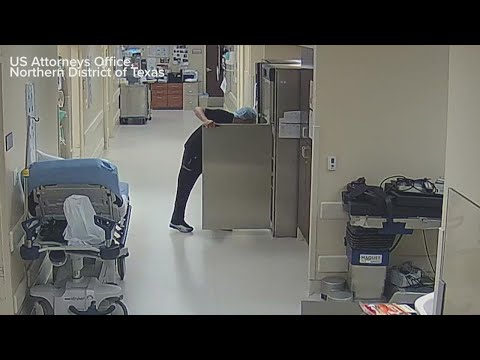 A Texas doctor is in jail after he poisoned IV bags, causing the death of a colleague and cardiac emergencies in 11 other patients, at a Dallas surgical center following a medical misconduct investigation, federal court papers allege.

Anesthesiologist Raynaldo Rivera Ortiz Jr., 59, was arrested on Sept. 15  after a string of healthy patients suffered from unexplained life-threatening complications during routine surgeries between May and August.

Shocking footage from Aug. 4 shows Ortiz emerging from a room at 12:35 p.m. at Baylor Scott & White Surgicare holding an IV bag as he walks down an empty hall toward an IV warmer.

He passes the warmer, then turns around then puts an IV bag inside.

A nurse retrieved the bag at 12:11 p.m., which was administered to a 56-year-old woman undergoing cosmetic surgery, according to a federal criminal complaint.

She suffered serious cardiac complications and was rushed to a nearby hospital.

Another clip from Aug. 19 shows Ortiz at around 10:24 a.m. with a saline pouch hidden under a paper folder. He switches the IV bag with one in the warming fridge.

The contaminated solution was given to a 54-year-old woman undergoing abdominal surgery who also suffered a cardiac emergency during surgery, the criminal complaint says.

The video clips were played at a court hearing last week, where federal prosecutors described Ortiz as a “medical terrorist” who used heart-stopping drugs to turn IV bags into “poison bombs that exploded on unsuspecting patients.”

U.S. Magistrate Judge David Horan denied Ortiz bond saying that if the doctor were released, he could engage in “violent retaliatory behavior against those who are involved in this investigation.”

Trouble began at the facility after administrators launched an investigation into Ortiz after an anesthesia patient of his stopped breathing during a routine procedure on May 19, 2022.

Two days after he was informed of the investigation, patients began suffering unexplained heart anomalies during surgery.

The most serious outcome occurred after anesthesiologist Melanie Kasper, 55, took a contaminated IV bag home on June 21 to rehydrate due to an illness — and suffered a fatal heart attack.

An autopsy later determined that she was poisoned by bupivacaine — a nerve-blocking numbing agent that is used for surgery and not administered intravenously.

On Aug. 24, an 18-year-old man was given saline for a low-risk ENT (ear, nose, throat) surgery when his “heart started beating out of control and his blood pressure spiked,” according to the complaint.

Federal agents obtained four IV bags — two used in the 18-year-old’s Aug. 24 surgery and two retrieved from the warmer, all of which had “small puncture holes.”

The bags tested positive for bupivacaine, epinephrine (a stimulant), and lidocaine.

If convicted, Ortiz faces up to life in prison or even the death penalty.

If no accountability we in trouble, put the maxi coon away.