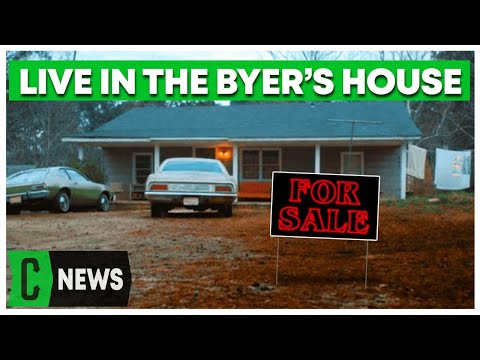 In the first episode of Netflix’s Stranger Things, Will Byers opens the door to his family home and frantically runs down the hall, but no one is home, and the monster is coming.

The program is set in the ’80s, the house is home to Will, his brother Jonathan, and his mother Joyce, and it is the picture of 80s nostalgia.

Earlier this month, the house was listed for $300,000 and sold after just a week on the market.

Set in the fictional town of Hawkins, Indiana, in Stranger Things, the real-life house is based in Fayetteville, Georgia, a small city on the outskirts of Atlanta.

The 1,846-square-foot home has a gravel drive, is surrounded by woodland, and sits on more than six acres of land.

In the series, we see the house’s walls covered with a scrawled alphabet, as Joyce and Jonathan try to communicate with the missing Will. Joyce later smashes those walls with an axe.

It is where the Byers family and friends meet to plot, where a trap is set to catch the monster, and where the Demogorgon moves between the real world and the Upside Down.

The property is advertised as a single-family residence with three bedrooms, two bathrooms, and an open-plan kitchen and dining room.

There’s a porch looking out over the garden and an outhouse – the same shack where Will is seized and brought to the Upside Down in the first episode.

Built in 1900, the house’s décor remains old-fashioned, with wood paneling and a ceiling fan in the living area. It was advertised as needing “a full rehab”, leading some to balk at its price. Indeed, property listing website Zillow puts the value as closer to $200,000.

This hasn’t deterred buyers, though. After just a week on the open market, the seller accepted an offer on the house from an investor — above the asking price.

Capitalizing on its Netflix fame, the Byers’ home will be reproduced to create a Stranger Things Airbnb, also featuring parts of the Upside Down.

Earlier this year, Stranger Things broke Netflix’s viewing records for the release of its fourth season, watched for 287 million hours during the premiere weekend.

Since the program first aired in 2016, the house has drawn so many visitors that its current owners erected a driveway barricade, as well as private property signs.

With Halloween on the way, the new owners hope to get something up and running quickly. The question is: would you stay there?