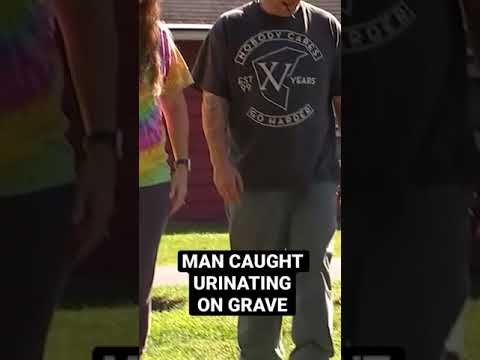 A New Jersey man is in hot water over his morning routine that includes urinating on his ex-wife’s grave.

The man has been desecrating the grave of his ex-wife, Linda Torello, who is buried at the Tappan Reformed Church cemetery, a centuries-old burial ground on the border between New Jersey and New York.

Torello’s son Michael Murray, said he began to notice that plastic bags full of feces were being placed on his mother’s grave so he contacted the police.

Murray watched and waited and was finally able to obtain clear footage of Torello’s ex-husband urinating on her grave.

The 68-year-old man visited the cemetery “almost every morning between 6:14 – 6:18 a.m. with his current wife” and urinated on Torello’s grave.

“I can’t get my wife to go out to dinner but this guy gets his wife to go along with him to desecrate my mom’s remains every morning!” Murphy said.

The couple was married for a short time over 40 years ago but he left when she became pregnant, claiming the child was not his, her family said.

DNA testing proved that he was indeed the child’s father, according to the official test.

A public urination charge was filed against the man by the Orangetown Police Department on Sept. 18, and the investigation is ongoing, according to Orangetown police.