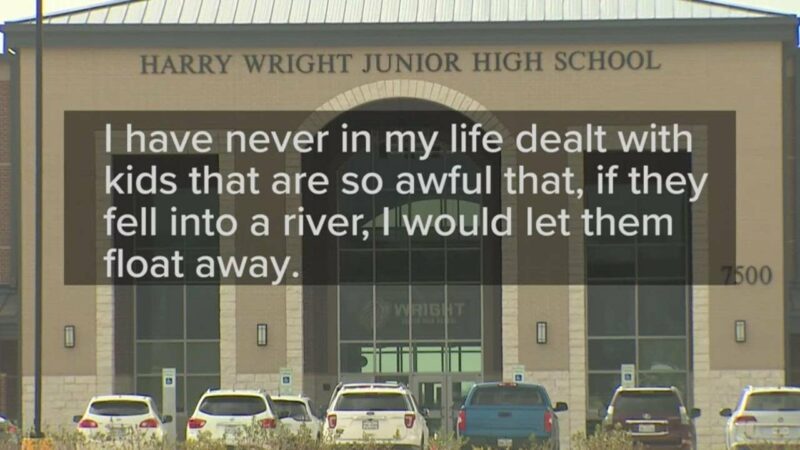 A Texas teacher is on administrative leave after a video showing her ranting about her students and her job was circulated online.

The unidentified teacher at Lamar Consolidated ISD’s Harry Wright Junior High School in Richmond was placed on leave after she was heard calling her students “complete and utter morons.”

“If I have to keep dealing with kids that are complete and utter morons, I’m done,” the teacher can be heard saying in the video which was recorded by a parent.

The teacher, who was in her first year at the school, also can also be heard complaining about her job, “I want to be fired at this point,” she said in the video. “I literally am going to hurt myself if I have to keep coming here.”

The teacher went on to say that she would not save her students if they were in danger.

“I have never in my life dealt with kids that are so awful that if they fell into a river, I would let them float away,” she said.

The video spread like wildfire on social media and sparked online discussions, with many people asking why she ever wanted to be a teacher.

“It’s ridiculous,” said parent Lucy Martinez. “Really, if she doesn’t like what she does, why be a teacher?”

Some others defended her without condoning the behavior by pointing out that teachers are overworked and stressed especially during the COVID-19 pandemic.

Lamar CISD issued a statement responding to the video, confirming the teacher had been placed on leave.

“Wednesday night (January 12), we were made aware of a video circulating on social media where a Wright Junior High School teacher is making disturbing comments,” the school district said.

“Of course, we take this very seriously and are actively investigating this situation. Wednesday night (January 12), the employee involved was made aware not to report to the campus and was placed on administrative leave Thursday morning (January 13),” the statement continued.

The district added: “Parents trust us with their students every day and, unfortunately, the actions of a single person have the potential to breach that trust. That is why it is important to underscore that the hardworking, dedicated staff at Wright Junior High School work to create a place where all students feel included and valued, and the comments made in the video are not a reflection of the campus as a whole.”

A Texas teacher is on administrative leave because the school district can’t handle the truth.