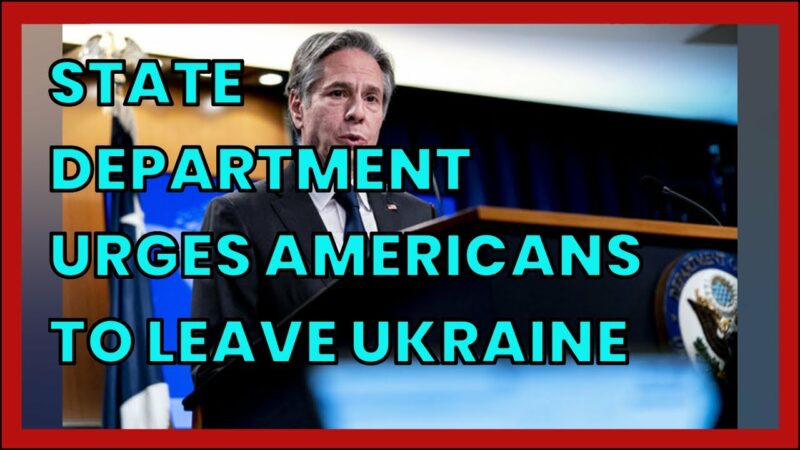 The State Department authorized an evacuation process Sunday for staff members at the embassy in Kyiv, Ukraine, and is recommending American citizens leave the country amid the continued threat of a Russian invasion.

“On January 23, 2022, the Department of State authorized the voluntary departure of U.S. direct-hire employees and ordered the departure of eligible family members from Embassy Kyiv due to the continued threat of Russian military action,” the State Department confirmed in a press release. “U.S. citizens in Ukraine should consider departing now using commercial or other privately available transportation options.”

The State Department’s announcement comes amid continued Russian aggression at the Ukrainian border. Russia has been amassing its forces at the border for months, and the efforts made by President Joe Biden’s administration to alleviate tensions through diplomatic means have been unsuccessful.

“There are reports Russia is planning significant military action against Ukraine,” the State Department also noted on Sunday. “The security conditions, particularly along Ukraine’s borders, in Russia-occupied Crimea, and in Russia-controlled eastern Ukraine, are unpredictable and can deteriorate with little notice. Demonstrations, which have turned violent at times, regularly occur throughout Ukraine, including in Kyiv.”

White House press secretary Jen Psaki issued a blunt warning regarding the escalating tensions during a press briefing on Jan. 18, when she said that “Russia could, at any point, launch an attack” against Ukraine.

“So, let’s be clear: Our view is this is an extremely dangerous situation,” she added. “We’re now at a stage where Russia could, at any point, launch an attack in Ukraine. And what Secretary of State Antony Blinken is going to go do is highlight very clearly: There is a diplomatic path forward. It is the choice of President Putin and the Russians to make, whether they are going to suffer severe economic consequences or not.”

Biden has vowed to impose “significant and severe economic harm on the Russian economy” if Russian President Vladimir Putin invades Ukraine. Blinken said on Sunday that “a single additional Russian force” entering Ukraine aggressively would spark “a swift, a severe and a united response from the U.S. and from Europe.”

While the administration has vowed serious repercussions if Russia moves forward with its invasion, Biden garnered confusion Wednesday after saying that Russia will be held “accountable if it invades” – depending “on what [Russia] does.”

“It’s one thing if it’s a minor incursion and we end up having to fight about what to do and not do, et cetera, but if they do what they are capable of doing with the forces massed on the border, it will be a disaster for Russia if they invade Ukraine,” Biden said during a formal press conference.

Shortly after his comments, both Psaki and National Security Counsil spokeswoman Emily Horne were quick to issue clarifications.

“President Biden has been clear with the Russian President: If any Russian military forces move across the Ukrainian border, that’s a renewed invasion, and it will be met with a swift, severe, and united response from the United States and our Allies,” Psaki said during a press briefing Thursday. “President Biden also knows from long experience that the Russians have an extensive playbook of aggression short of military action, including cyber-attacks and paramilitary tactics.”