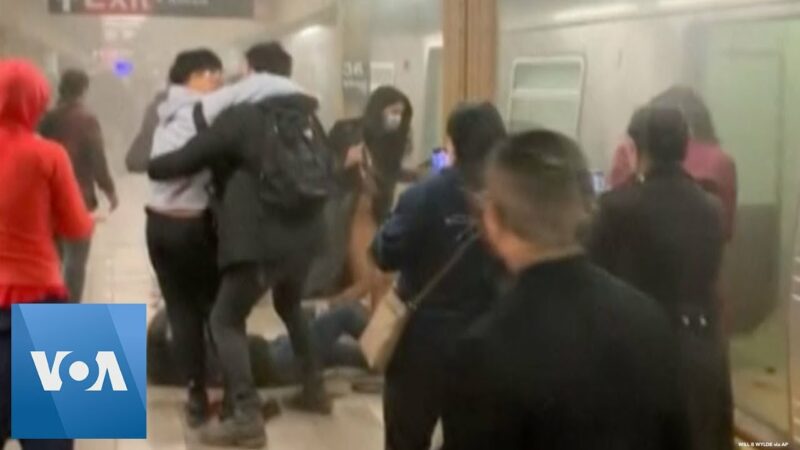 A manhunt is underway after a lone gunman wearing a reflective vest and a gas mask threw smoke bombs on a subway car in Brooklyn and then opened fire, leaving 29 people shot or otherwise injured.

The NYPD has located a U-Haul believed to be connected to the shooting and detectives say they now have a good idea of who they are searching for.

The shooting happened on a Manhattan-bound N train where police say the suspect was seen mumbling to himself before putting on the gas mask and removing a canister from a bag before the car began to fill with smoke.

The suspect then opened fire with a handgun, striking several people on the train and the platform at the 36th Street subway station.

Shell casings were recovered on the train and on the platform along with a handgun that had three extended round magazines, the one in the gun jammed, which likely saved lives.

Multiple smoke devices and a bag of commercial-grade fireworks were also recovered, as well as a credit card authorities say was used to rent the U-Haul.

Surveillance cameras in the station were inoperable but law enforcement was able to get an image of the suspect from a bystander’s cell phone video.

Officials confirmed that 10 of the victims, who range in age from 17 to 50, were shot, five of whom are listed in critical but stable condition. None of the injuries are considered life-threatening.

It is unclear if the gunman fled out of a station or into the subway tunnel.

Hospitals reported a total of 29 patients being treated for non-life-threatening injuries they sustained during the shooting.

The suspect was described as a male, 5-foot-5 and 175 to 180 pounds, wearing a green construction vest and a gray hooded sweatshirt.

“This morning, Sunset Park commuters were assaulted by a senseless act of violence,” Brooklyn Borough President Antonio Reynoso said. “As always in a time of crisis, Brooklynites experienced the swift reaction of our city’s first responders, including the MTA, NYPD, and FDNY. I am deeply heartened to see the Sunset Park community coming together during this time of tragedy – Brooklyn stands with you. I will continue to work with local authorities and elected officials as more details of the attack are confirmed and the perpetrator is found.”

This latest incident comes as New York City has faced a rash of shootings and high-profile incidents in recent months, including on the city’s subways. One of the most horrifying was in January when a woman was pushed to her death in front of the train.