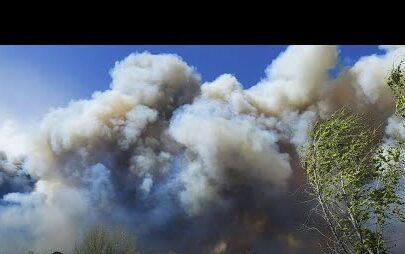 Republican Arizona Gov. Doug Ducey declared a state of emergency Thursday to facilitate resources to combat a more than 20,000-acre wildfire burning in the northern part of the state.

Residents outside Flagstaff first reported the fire Sunday afternoon. The blaze spread rapidly, feeding on trees in the Coconino National Forest, which has since been partially closed to the public. The state has sent 371 firefighters, 30 engines, three helicopters and one plane to battle the blaze.

“As strong winds fuel fires across Arizona, we are doing everything we can to keep Arizonans safe. We pray for the safety of the responders and firefighters in Northern Arizona, and are thankful for their dedication to protecting the lives, pets and property of Arizonans,” Ducey said in a statement.

“We will continue to monitor the situation and deploy additional resources as necessary,” he added.

The Federal Emergency Management Agency (FEMA) approved the use of federal funds Tuesday to help fight the fire and aid in evacuations. There are more than 2,000 residents living in areas designated for evacuation, with 766 households already evacuated as of Wednesday, Coconino County Board of Supervisors chair Patrice Horstman said.

The Tunnel Fire, named after a tunnel landmark located in the forest, is one of several fires currently burning in the Southwest. Authorities evacuated homes and roads near Taos, New Mexico in response to a wildfire Thursday, and a fire in southern Colorado forced the evacuation of 100 homes.

These huge blazes mark the beginning of wildfire season in the southwest, according to Brian Klimowski of the National Weather Service.

“It’s going to be a long one this year,” he said Wednesday.

Ducey called a special legislative session in 2021 in response to the growing threat of wildfires, which authorities blamed on abnormally low levels of rain and abnormally high levels of wind. The state legislature allocated an extra $75 million to respond to more than 524,000 burned acres.