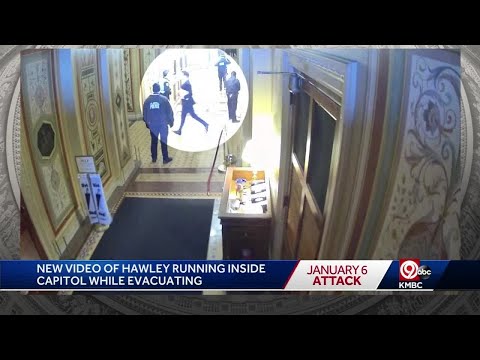 The Late Show With Stephen Colbert aired live on Thursday following the primetime January 6 Committee hearing, and Colbert couldn’t resist mocking Senator Josh Hawley (R-MO). At the hearing, the Committee played a video of Hawley running through the Capitol to escape the very people whose beliefs he claimed to represent.

“Then the committee talked about Missouri Senator Josh Hawley,” Colbert said, sparking a chorus of boos, “the man who famously raised a fist in solidarity with the mob before entering Congress that day. Turns out, once the mob broke into the building, he wasn’t quite so enthusiastic to stand with them.”

Colbert played the video for the audience, who immediately started laughing at Hawley.

Colbert then replayed the video over audio of the sound it makes when Scooby Doo takes off running.

MSNBC’s Chris Hayes joined the show and had a fascinating take on why the Committee decided to show the video at the hearing.

“Why do you think they did that?” Colbert asked. “What was the value of showing Josh Hawley skedaddling?” “The value was the Committee telling Josh Hawley to go F himself,” Hayes replied while laughing. “I don’t think there was a tremendous amount of probative value in the presentation.”

And Hayes believes this does bode well for Hawley, who not only supported the rioters before the insurrection but was one of a handful of Republican senators who voted against certifying the election after the Capitol was attacked.

“I think it’s important for us to see that they were running because they were scared because they were being evacuated,” Hayes said. “You went out there that day to go throw your fist up and to play with fire, and everyone got to see you do that, and see you fundraise after it, and see you talk about how you own the libs, but not see you with your tail between your legs when the mob is about to knock down your door.”