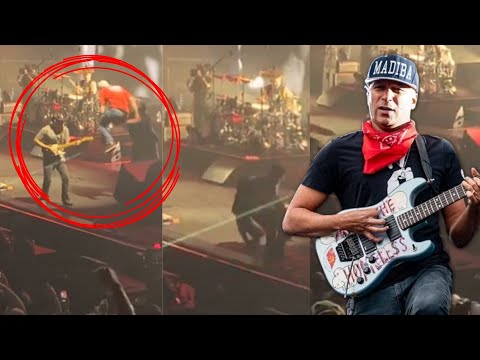 Rage Against The Machine’s Tom Morello Tackled During Toronto Concert

Rage Against the Machine’s Tom Morello was inadvertently tackled by a security guard during the band’s concert on Saturday in Toronto, with the show pausing as the guitarist pulled himself out of the pit.

As seen in the video of the incident, midway through their closing song, “Killing in the Name,” a fan in a red shirt rushed the stage.

However, as the stage-crasher was about to leap off the stage in an effort to escape, a security guard intercepted him with a lunge that not only foiled the fan’s jump but also clipped Morello causing him to fall into the pit.

Singer Zack de la Rocha who is still confined to a chair after injuring his leg earlier in the reunion paused the show to make sure Morello was okay. The guitarist jumped up and waved to the crowd and the band restarted “Killing in the Name” to wrap up the Toronto gig.