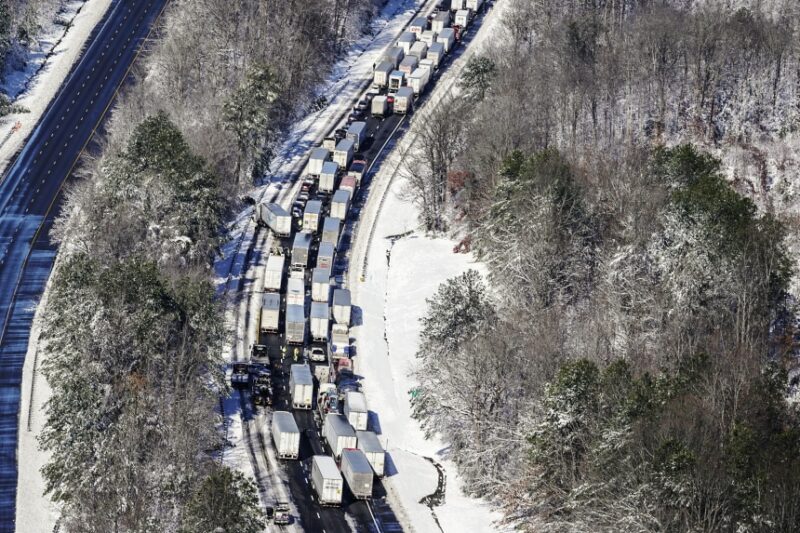 Snowstorm Leaves Miles Of Parked Cars On I-95 In Virginia

Miles of vehicles were stranded for more than 15 hours on I-95 in Virginia due to icy roads, heavy snowfall, and a tractor-trailer crash Monday.

North and southbound traffic on I-95 came to a complete standstill Monday between Ruther Glen, Virginia, in Caroline County and exit 152, in Dumfries, Virginia, in Prince William County, after a heavy winter storm caused hazardous driving conditions that led to a tractor-trailer accident according to the Virginia Department of Transportation.

“We know many travelers have been stuck on Interstate 95 in our region for extraordinary periods of time over the past 24 hours, in some cases since Monday morning,” Marcie Parker, the state transportation agency’s Fredericksburg District Engineer said in the press release.

“This is unprecedented, and we continue to steadily move stopped trucks to make progress toward restoring lanes. In addition to clearing the trucks, we are treating for snow and several inches of ice that has accumulated around them to ensure that when the lanes reopen, motorists can safely proceed to their destination,” Parker said.

Democratic Virginia Gov. Ralph Northam said that his team had worked through the night with state police, transportation, and emergency officials.

“An emergency message is going to all stranded drivers connecting them to support, and the state is working with localities to open warming shelters as needed,” Northam tweeted. “While sunlight is expected to help VA DOT clear the road, all Virginians should continue to avoid 1-95.”

Up to 11 inches of snow fell in the area Monday, causing many accidents and leading some to abandon their vehicles on the interstate.

The accumulated snow coupled with the crash made it impossible for cars to move, leaving travelers posting frantic messages on social media.

Democratic Virginia Sen. Tim Kaine said that he was stuck on the road for 19 hours, and a reporter on NBC’s “Morning Joe”  joined the show while sitting in the traffic jam.

It’s not the Rednecks who’re problem drivers. It’s the foreign and illegal aliens drivers who cause much of it. Besides, VA is a Blue state my progressive demagogic friend. So take your animus elsewhere.

So let me understand this, these drivers were left stranded in freezing temperatures for 15 hours?