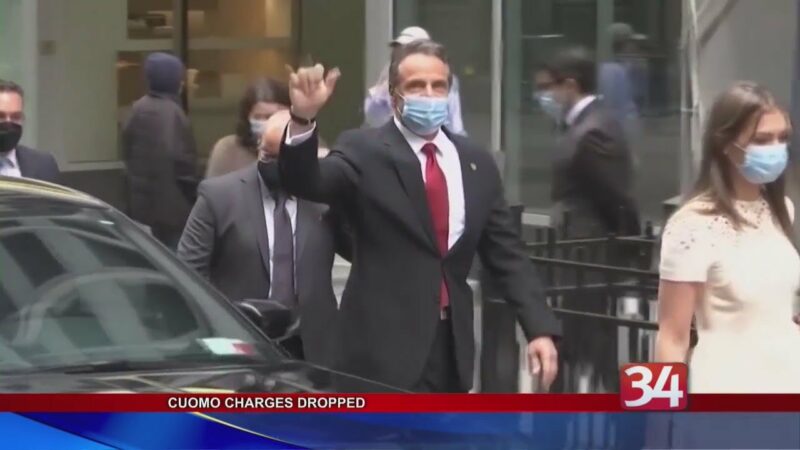 Disgraced former Democratic New York Gov. Andrew Cuomo has managed to sidestep criminal charges for his role in the two notorious scandals that led to his resignation, according to law enforcement officials.

The Manhattan District Attorney’s office announced Monday that it will not pursue criminal charges against Cuomo for misleading the public about COVID-19 deaths in New York’s nursing homes. On Tuesday, the Albany District Attorney’s office announced that it does not have sufficient evidence to mount a criminal case against Cuomo for workplace abuse and sexual harassment.

“While we found the complainant in this case cooperative and credible, after review of all the available evidence we have concluded that we cannot meet our burden at trial,” Albany DA David Soares wrote Tuesday. “As such, we have notified the Court that we are declining to prosecute this matter and requesting the charges filed by the Albany County Sheriff be dismissed.”

Cuomo was often praised by the media during the initial months of the pandemic, however, the tone began to change in May when it was reported that his office had knowingly undercounted COVID-19 nursing home deaths. The information came out months after he had ordered the state’s nursing homes to accept COVID-19 patients. Cuomo’s top aide, Melissa DeRosa, later admitted to the New York General Assembly that Cuomo’s office had been in dread of a federal investigation.

Cuomo’s governorship survived the nursing home scandal, it wasn’t until several former staffers accused him of sexual harassment and workplace abuse that he was forced to resign in August. In a final speech announcing his resignation, Cuomo claimed that he had done nothing wrong and that he had been the victim of changing social standards.

“I’ve never crossed the line with anyone. But, I didn’t realize the extent to which the line has been redrawn. There are generational and cultural shifts that I just didn’t fully appreciate,” Cuomo said at the time.

The scandals also cost Cuomo the $5 million in profits he’d made from his book about the COVID-19 pandemic, which he wrote and published even as the virus plauged New York and the entire country.