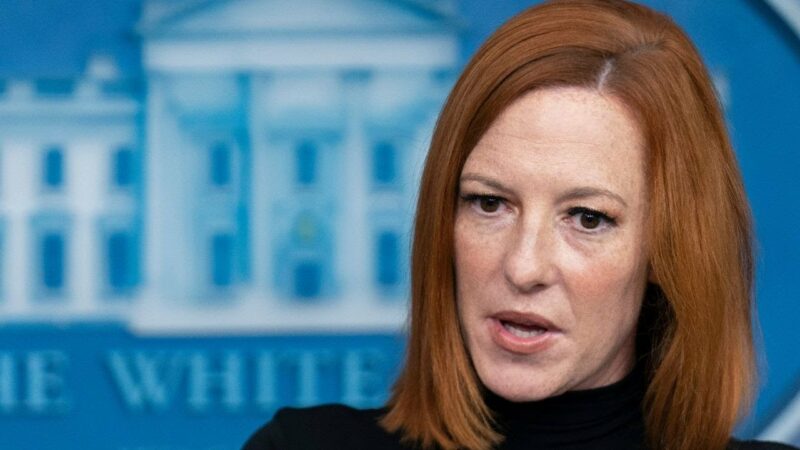 Psaki Claims Biden Administration Has Covid Under Control Despite Surge

White House press secretary Jen Psaki insisted that the Biden administration has not “lost control” of the COVID-19 pandemic on Tuesday when she was questioned about the growing number of issues related to the omicron coronavirus variant.

President Joe Biden continuously promised on the campaign trail that he would “shut down” the virus if elected and regularly declared that it was former President Trump’s ineptitude that “caused the country to have to shut down in large part,” often insisting his administration would take care of the pandemic more effectively. However, as the omicron variant has spread throughout the country, news reporter Ed O’Keefe cited the many issues that have only gotten worse.

“Cases are rising across the country. Tests are hard to come by in many places, or there are long lines for them. Schools are closing again or having to go virtual and that’s not because of the weather, in some parts of the country, but because of the pandemic. There is a sense among many that the country has lost control over the virus,” O’Keefe said before asking, “Would the White House agree with that?”

Psaki quickly snapped back, “We would not.”

“We’re in a very different place than we were a year ago, Ed. 200 million people are vaccinated. Those are people who are protected, seriously protected from illness and death from the virus. We have also just purchased the largest over-the-counter purchase of tests in history,” Psaki said. “That builds on the fact that we have already distributed 50 million tests back in December to rural health centers, to community health centers, the fact that we have 20,000 sites across the country where you can get free tests, the fact that next week people can get reimbursed for their tests, and we are going to continue to build on that.”

Psaki then proclaimed “97% of schools are open” and Biden “wants schools to be open” despite a surge in COVID cases across the nation.

“He advocated for $130 million in the American Rescue Plan and $10 billion to cover testing, even when many people said that was not necessary and was not needed,” Psaki said. “That has all been distributed to states. If states have not used it, and some have not, and school districts have not used it, now is the time to use it. So I would note that we have taken steps to prepare for any contingency, any moment, and we’re working to implement and build on that from here.”

The rise of omicron has coincided with a record surge in new COVID-19 cases across the country.

The first case of the omicron variant was detected in the United States on Dec. 1 and was responsible for only 0.6% of new cases for the week that ended Dec. 4. In only a month the new variant has displaced delta, with the omicron variant being responsible for 95.4% of all new cases in the week that ended Jan. 1, according to data released by the CDC Tuesday.

More people have died from covid under the drooling fool, then did under Trump, and thanks to Trump, the asshole Joe has vaccines to work with. Joe’s a fucking loser, as is his press secretary!

LOL…par for the course whether it’s the outer course or the inner course.

we have NEVER seen this number regarding covid from Trump…psaki, quit lying to the American public…it is OUT OF CONTROL, we have EYES you know, we have BRAINS you know, WE KNOW that vaccinated people are the ones who are getting this

What makes one so depressing that they sell their soul to one as vile as the delusional democrat party . Bad enough that you have to lie to others to make yourself look good but when you lie that bad that everyone sees it . Then your living to yourself . How can you look yourself in the mirror each morning knowing your a piece of sh#t and as bad as the last lie you told . That’s the hard part to swallow