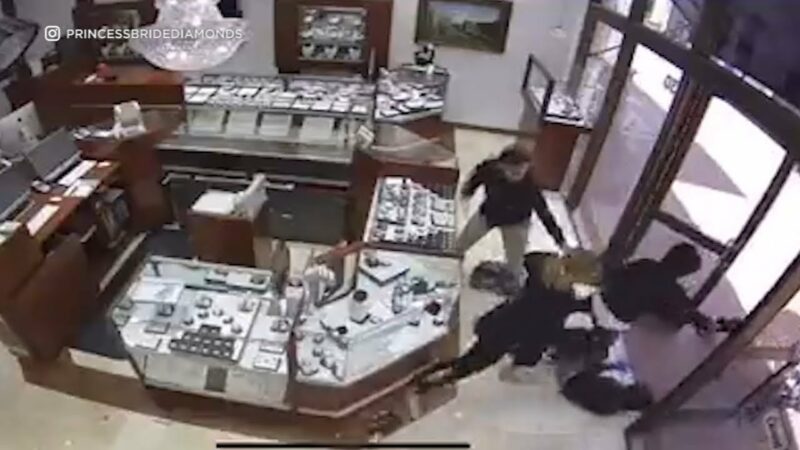 Smash-And-Grab Theives Get More Than They Bargained For

Smash-and-grab thieves got a big surprise Sunday when they targeted a California jewelry and the store’s employees fought back.

That’s when store employees, including a brother and sister who work for their father’s family-owned business, responded by punching and kicking the attackers.

One young woman even smashed one of the would-be robbers over the head with a bar stool.

It didn’t take long for the intruders to retreat.

The Baca family has been in the diamond business for years, but this was the first such attack they’ve faced.

“We had an idea that it could happen, but it’s always different when it actually does happen,” said employee Dallas Baca.

“At some point, while I was fighting them, one of them actually hit me in the head with a hammer, on the side of my left temple, but I didn’t even register it until after they left because there was so much, like, adrenaline going on,” Dallas Baca added.

“I’m just glad everyone’s OK. I’m glad that our team banded together and we were able to put up a fight and stop what was happening,” added fellow employee Sarah Baca.

“This is the first time I’ve seen anything like this ever recorded,” said retired LAPD detective Moses Castillo.

Although the store employees thwarted the robbers, one employee was struck with a hammer.

Experts warn that it’s dangerous to fight back in a situation like this.

“They were very fortunate the criminals did not have any weapons beyond what they used to smash that display case,” said law enforcement expert Bruce Thomas. “If there was a gun involved, this could have turned out very, very different.”

Did they let them live?