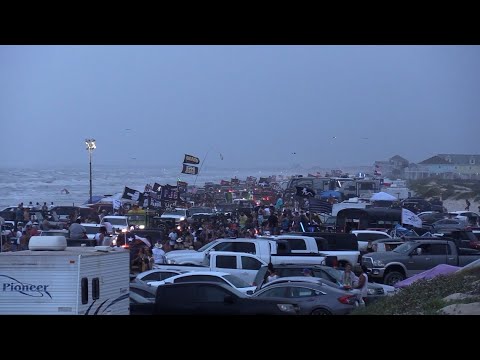 This year’s annual “go topless” Jeep weekend in Texas ended with more than 100 arrests and dozens of people, including a sheriff’s deputy, being sent to the hospital during this year’s event.

Galveston County Sheriff Henry Trochesset said that deputies responded to multiple assaults, fights, and DWIs, resulting in more than 100 arrests over the weekend.

Deputy Sgt. John Hamm, was responding to a crash around 1:30 a.m. Sunday on Highway 87 and Holiday Drive when he was struck by a suspected drunk driver. The deputy was seriously injured and airlifted to the University of Texas Medical Branch.

The driver, Darius Danzell Gilbert, a 22-year-old from China, a city in Jefferson County, was arrested and charged with aggravated assault with a deadly weapon on a peace officer. He was being held on a $100,000 bond.

The impact was such that the deputy nearly went through the car’s windshield, Trochesset said. Hamm suffered two broken legs, as well as an arm and a head injury, and underwent surgery Sunday morning.

At least 38 individuals were transported to area hospitals during the out-of-control Jeep weekend, including eight people requiring helicopter transport.