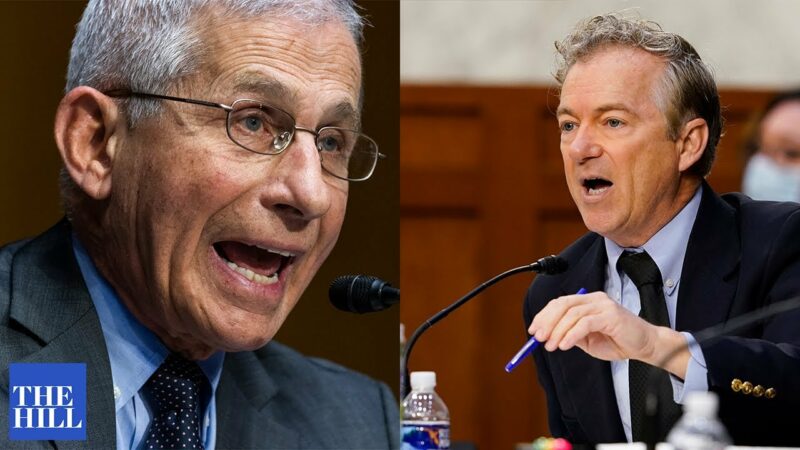 Sen. Rand Paul Calls On Fauci To Be Held Accountable For His Crimes

Democrats in control of the Senate refuse to hold a hearing on the origin of the global coronavirus pandemic or Dr. Anthony Fauci’s culpability in funding China’s gain-of-function research, but Sen. Rand Paul, R-Ky., vows `that will change if Republicans retake the Senate in 2022.

“The Democrats have refused to have one hearing on this,” Paul said. “It’s been going on; we’ve had a pandemic that caused 5 million people to die. We’ve had no hearings, zero hearings on the origin of this, or the possibility that it came from gain-of-function research that Dr. Fauci and the NIH [National Institutes of Health] was actually funding.”

Whether it is Fauci’s attempts to cover for funding of Wuhan Institute of Virology (WIV) research that resulted in gain-of-function of SARS-CoV-2 or looking into funding research that tortures dogs, Democrats have a “disgusting” disinterest in investigating the allegations in Congress.

He believes Democrats “have looked away and said, ‘nothing to see here’ – whether it’s the origin of the virus or, you know, torturing animals. So I think there needs to be more oversight on this.”

It fundamentally comes down to having Republicans back in control of the House and Senate, so someone like Paul could serve as a health committee chairman and lead an investigation of Fauci and NIH funding for “dangerous” and controversial research.

“There could be a time after another election, if we take back over that I could be in charge of the health committee,” Paul, an ophthalmologist, continued. “And I promise you, there are going to be investigations into the origin of the virus – because this could happen again – and there also will be investigations as to whether or not the animal studies that are happening are absolutely necessary.”

Paul has been an impassioned critic of Fauci’s work as the director of the National Institute of Allergy and Infectious Disease, especially in regard to denials that U.S. taxpayer dollars have been funneled through the EcoHealth Alliance international nonprofit to fund research at the WIV which led to gain of function of the virus behind the global pandemic.

“There’s a scientist from MIT who wrote in The Washington Post – this is not a conservative journal, The Washington Post – he wrote that this type of research could be a civilization-ending kind of phenomenon, similar to like sharing nuclear secrets about how you make a nuclear weapon,” Paul declared.