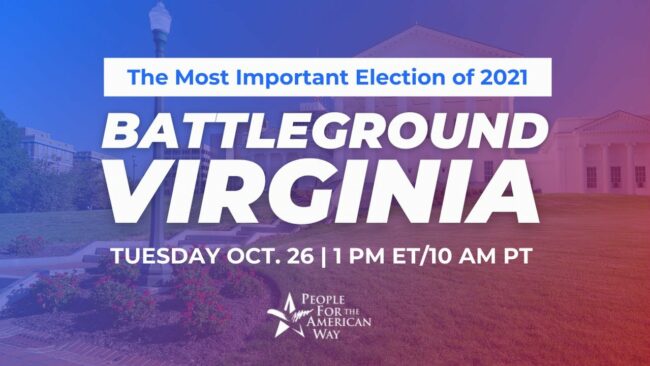 The suburbs of Northern Virginia, just outside of D.C., have been steadily gravitating toward blue since around 2013 but a shift to the red here could determine who will be Virginia’s next governor. In the 2021 gubernatorial race, area Republicans are pushing hard for nominee Glenn Youngkin in what is going to be a very tight race statewide. Democrat President Joe Biden won Virginia by 10 points in the 2020 presidential election.

“People are excited right now,” said Fairfax County GOP Chairman Steve Knotts. “A few years ago, I’d go to a polling site, and people would come and hug me saying, ‘We haven’t seen a Republican in this precinct for years!’, and now we’re there consistently.”

Matthew Hurtt, director of communications for the Arlington County Republicans, said that people care a great deal about election integrity and it’s driving the participation they’re seeing. In the last election local voting locations had 400 Republican election officers, and this year there are expected to be 1,100 of them.

Youngkin’s opponent, McAuliffe, who was governor from 2014 to 2018, is an avid supporter of mask and vaccine mandates, an advocate for universal background checks for guns, and a strong backer of the Affordable Care Act.

Knotts couldn’t help but point out that crime and public safety are important issues in this election and the economy could play a big part in the voters’ decision.

“We’re watching crime skyrocket, from the whole defund the police movement, the [School Resource Officers] out of public schools, fights and other activity going on. There’s a lot of things to do with public safety in general that people are really concerned about right now,” Knotts continued.

“In the last few years, Virginia tumbled from being one of the best places to do business and now it’s one of the worst,” Hurtt said, referring to legislation passed in January 2021 which requires businesses in Virginia to pay state income taxes on loans from the federal government.

Hurtt said that Biden’s low approval ratings will drive Republican votes, Knotts said that Youngkin could win without it.