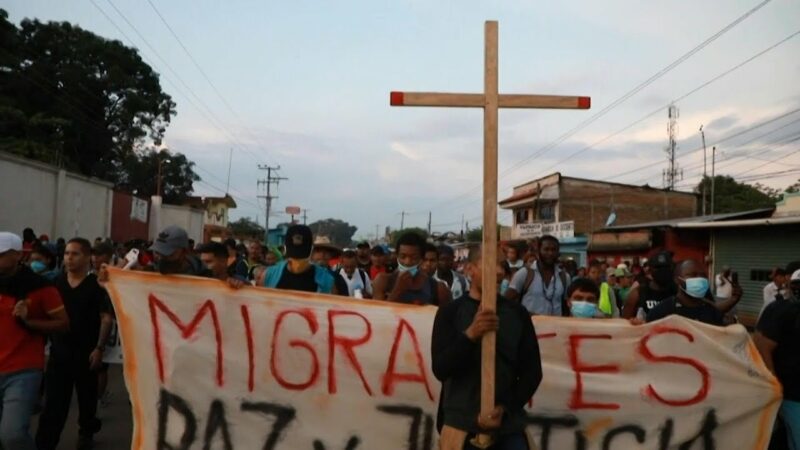 Former President Donald Trump on Wednesday said the caravan of Central American and Caribbean migrants “must be stopped” before it reaches the U.S.-Mexico border.

Hundreds of migrants, many of which are families with young children, are making their way across Mexico. A witness estimated there were about 2,000 migrants Tuesday resting and getting medical attention in the southern Mexican state of Chiapas before continuing on their journey north.

“I hope everyone is watching the MASSIVE Caravan pouring through Mexico and headed to our Country,” Trump said in a statement.

“This must be stopped before they reach our Border, or before. Just nine months ago, we had the strongest Border in our Nation’s history. This should have never happened!”

Trump also released a statement about the caravan on Sunday.

“The largest caravan in history is coming towards us, and we are totally unprepared and doing nothing about it,” Trump said. “Complete the wall and get tough. Our Country is being systematically destroyed before our very eyes!”

In a separate statement Sunday, Trump said the U.S. was “being poisoned with the millions of people that are illegally flowing through our Borders, in most cases not even questioned or stopped.”

“Many are criminals from the emptied prisons of other countries, most of these are very dangerous people,” he said. “The first thing that should be done, and it can be done quickly, is FINISH THE WALL,” he wrote. “A deal must be made with Mexico, where Mexico serves as a 2,000 mile barrier, not a launching pad for the illegals that are coming in.”

Migrants in the latest caravan are primarily from Honduras and El Salvador.

A previous caravan of thousands of Haitian migrants reached the southern border in September.