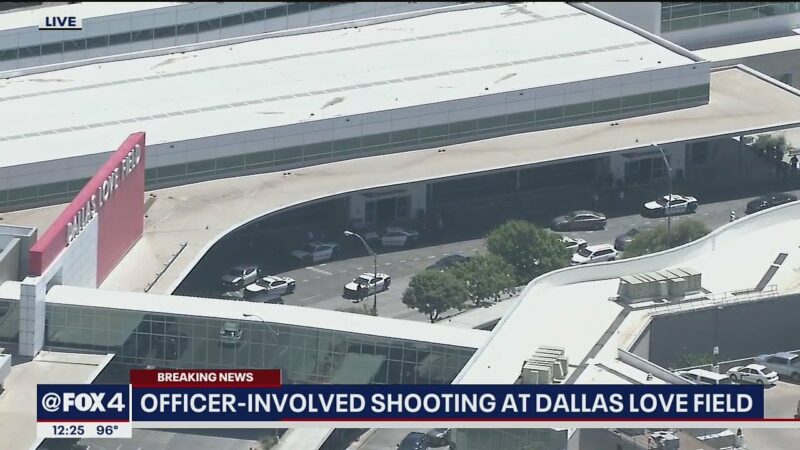 A woman near the ticket counter at Dallas Love Field Airport pulled out a gun and began shooting late Monday morning, stopping flight operations for several hours. Witnesses said the woman was confronted and shot by officers. No other injuries have been reported.

Dallas Chief of Police Eddie Garcia said 37-year-old Portia Odufuwa, was dropped off at the airport around 11 a.m., where she went into a restroom and changed clothes.

Garcia said Odufuwa came out of the restroom wearing a hoody, pulled out a gun, and began firing. It appeared that she was aiming toward the ceiling, he added.

“At this point, we don’t know where exactly the individual was aiming. From what we are seeing she was aiming at the ceiling,” Garcia said. ” There are several rounds that were found.”

According to the airport, officers confronted Odufuwa at about 11:23 a.m. and shot her in her lower extremities. She was taken to Parkland Memorial Hospital in unknown condition.

Cell phone video showed travelers on the ground, behind chairs at the gates, and sheltering in place while the shooting unfolded.

The investigation is ongoing, and authorities say they do not plan to release any other statements until Tuesday afternoon. The Dallas FBI and ATF are assisting Dallas Police in the investigation.

Witness Colby James said he was standing near the woman when she pulled out a gun and began shooting.

James said Odufuwa declared that she had an announcement to make and said something about her husband cheating.

“She basically said her announcement, talking about her husband was cheating or something. And she basically said she was about to blow this sucker up. After she said that she pulled out a gun. She fired the first shot in the air and basically, everybody scattered,” James said. “We were running. There were 10-12 more shots after that.”

Witness Karen Warner said she was checking in for her flight when she heard a loud argument about 20 feet behind her, followed by a gunshot. Then she started running.

“I heard about 10 more shots while I was running away,” said Warner, who couldn’t discern what the argument was about.

Was she ugly, too?