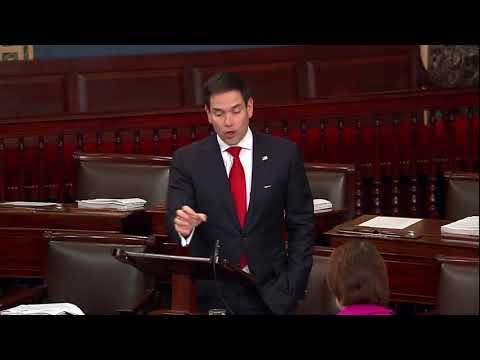 Rubio Says Our Financial Addiction To China Could Be Our Downfall

The threat of a U.S.-China war over Taiwan has been causing concern in Washington. According to Sen. Marco Rubio, R-Fla., war with China is only a matter of strategic financial deterrence.

“We have to ensure that that equation remains that way,” he added. “The day the benefit of going into Taiwan outweighs the cost – the risk of them doing it is very high.”

The Chinese Communist Party (CCP) has demonstrated that it intends to seek “complete reunification” of Taiwan with mainland China.

Beijing’s relationship with Taipei has been tense since the Republic of China moved to the western Pacific island in 1949 amid conflict with the CCP.

While Taiwan identifies as a sovereign nation, the CCP, the United Nations, and the U.S. recognize Taiwan as a part of China under the “one-China” policy.

The U.S. however, maintains its commitment to ensuring Taipei’s ability to operate free from Chinese government control.

Chinese control over Taiwan could potentially mean that not only the U.S., but the global economy, may encounter increasing supply chain issues.

Taiwan produces the majority of semiconductors, which are needed to supply the growing demand for electronics worldwide.

But Rubio argued that apart from stopping a Chinese monopoly over the crucial supply of semiconductors, the U.S. cannot lose respect when it comes to protecting another ally.

“If Taiwan would ever be taken by force…and the U.S. is incapable or unwilling to do anything about it – that is the end,” Rubio said. “Not just of the strength of our alliances and our assurances to the different allies in the Asia Pacific region, but it’s the end of them all over the world.”

Rubio, who sits on the Senate Foreign Relations Committee, said China is seeking to dissuade U.S. intervention in Taiwan by building out their missile defenses that are not only capable of causing significant casualties, but of sinking expensive aircraft carriers.

“You’ve got to be able to defeat the weapons they’re developing,” he said. “What they are trying to do is develop weapons that basically forces [the U.S.] to not send aircraft carriers and naval vessels into the vicinity.

“And if we don’t have the technology to defeat the things that they are developing – we won’t be able to do that and they know that,” he added.