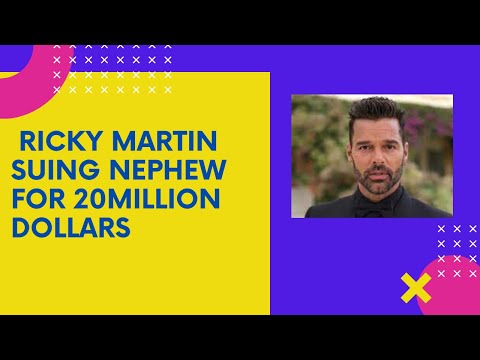 Ricky Martin says he’s been “persecuted, besieged, harassed, stalked and extorted by a maladjusted person.” Martin says he is suing the guy who made despicable accusations against him…his nephew.
Martin filed a lawsuit Wednesday against Dennis Yadiel Sanchez Martin, who the singer says is trying to “assassinate” his reputation.

Dennis alleged back in July that he had a 7-month long romantic relationship with Ricky, and after it ended, Ricky began stalking and harassing him — something Ricky adamantly denies. The nephew initially filed a restraining order but when the heat was on him, he withdrew it.
According to Ricky’s new lawsuit, his nephew is threatening him. Ricky claims a month after Dennis withdrew his restraining order, he began sending messages to Ricky through Instagram … threatening to “assassinate his reputation and integrity” unless he paid up.
In the lawsuit, Ricky said that before Dennis filed for a restraining order, he was publicly boasting about being Ricky’s nephew. Ricky says his nephew blew his phone up with messages — sometimes more than 10 in a single day — for 4 months. Ricky says the messages were clearly written by a “maladjusted individual.”
Ricky claims his nephew went rogue, posting the singer’s cellphone number on his Instagram.
Ricky says he’s lost numerous, multi-million dollar deals because of his nephew’s false allegations, and now wants no less than $20 million in compensation for his losses.
Ricky says Dennis’s actions have caused him and his family to feel “unsafe” in Puerto Rico. He wants the judge to order Dennis to refrain from all communications with Ricky and his family.
Subscribe
Login
0 Comments
Inline Feedbacks
View all comments
Previous Post
Next Post