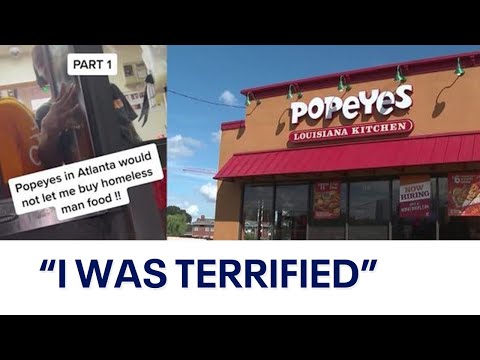 A Georgia college student was trying to purchase food for a homeless man from a Popeyes store in Atlanta and had the police called on her.

Jo Ortega, a student at Georgia State University, said she was picking up an order for DoorDash at the Popeyes location last month when she saw a man who appeared to be hungry.

She felt led to order the man some chicken but said employees at the store would not allow her to do so.

Ortega posted a video of the interaction on TikTok and it quickly went viral.

“No ma’am, you can’t do it,” one employee told her in the video.

“Ma’am, you can’t do it. I could care less about you recording me, baby,” another employee said before shutting the drive-thru window.

Ortega said Popeyes workers then called the police on her.

“At that moment I was terrified, I thought I was gonna get arrested,” Ortega said. “Maybe I should just call my family, and I might not be coming home tonight.”

“Units arrived on the scene, and the caller was already gone. The call was cleared with no arrest/no report,” Public Information Officer Benjamin Hopson said.

Ortega said the officers thanked her for trying to buy the homeless man food.

“The officer pulled me to the side and said, ‘I really thank you for doing that, thank you for buying him food. I appreciate that”  she said.

Ortega said she finally spoke with a general manager at the store who was livid about the incident and allowed Ortega and the man to order anything they wanted that night for free.

In a follow-up video, the man, named Jazz, thanked Ortega for getting him something to eat.

“My name is Jazz and thanks,” he said while holding a Popeyes cup.

Popeyes said in a statement that the company is “committed to treating everyone with dignity and respect.”

“We have ensured all employees at this restaurant have been provided with retraining to help navigate a range of guest interactions, such as the situation highlighted in the video,” the statement continued.

Ortega has started an online fundraiser to help Jazz find a place to live.

The perennial question is, “Who is my neighbor?” For Ortega it was Jazz, and she did the right thing.