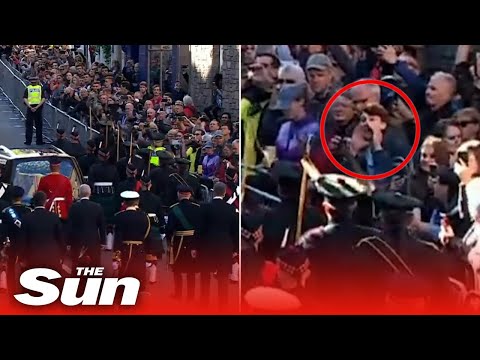 In one clip a man seemingly screams, “Andrew! You’re a sick old man!” but another clip sounds more like, “Andrew, you’re a pedo bastard!”

The outburst was likely referring to Prince Andrew’s relationship with convicted child sex traffickers Jeffrey Epstein and Ghislaine Maxwell and the years it took Andrew to settle the child sexual assault case against him with his victim.

Multiple people in the crowd grabbed the man and threw him to the ground, after which British law enforcement intervened and helped the man to his feet, and took him away.

The procession was on its way to St Giles’s Cathedral in central Edinburgh. The young man called Andrew out by name after people fell silent in the crowd. Police arrested the man, who told reporters that “powerful men shouldn’t be allowed to commit sexual crimes and get away with it.”