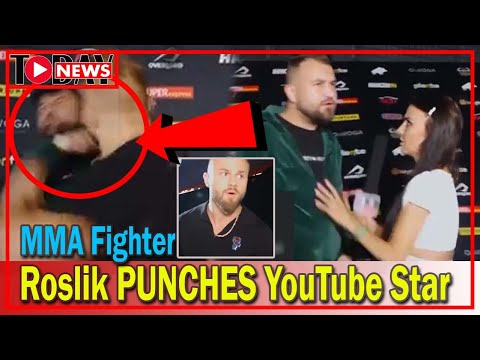 Journalist Monica Laskowska was interviewing YouTube personality Sadek Tuesday when Roslik came at Sadek unexpectedly and punched him. Sadek fell back, hitting the ground before getting back up, with a bloody mouth and looking confused.

“It’s ok,” Sadek said once he had regained his footing, seemingly unsure of what had just happened.

Sadek had apparently made some remarks criticizing Roslik and his family, possibly provoking the attack. No charges have been filed against Roslik as of yet.

Ferrari also lost his temper during a March interview and threw several punches at his opponent before stomping on him after his opponent slapped him.

The MMA fighter is slated to fight Pawel “Scarface” Bomba at High League 4 in Poland on Saturday.

Roslik was disqualified in 2020 after he kicked his opponent in the head after he had already fallen to the ground unconscious after a knockout.