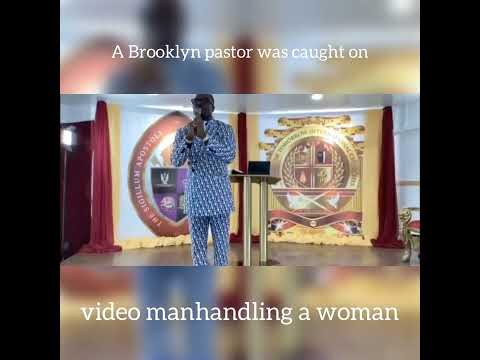 A video shows a Brooklyn pastor manhandling a woman during his Sunday sermon — and although police responded …he was not arrested.

Bishop Lamor Whitehead heads up the local chapter of the Leaders of Tomorrow International Ministries in the Canarsie neighborhood of B-Town … where he quite literally laid his hands on a woman mid-sermon.

It’s unclear what led to the incident, but apparently Whitehead was upset about someone filming the service, and it turned into a physical altercation.

In the video, Whitehead is interrupted by someone shouting, and he tells the congregation to let her record and he eventually invites her up to the pulpit.

Whitehead asks the woman if she would like to come up and deliver the message for him, then he tells the visitors to praise Jesus while speaking in tongues. When the woman reaches the altar, he grabs her by the head and shoves her out of frame.

Whitehead tells somebody to get her out and says that he felt threatened, as though he was trying to justify what he’d done. He then continues the service as if nothing happened.

Whitehead and the victim went to the police precinct for further questioning. No charges have been filed at this time.

Whitehead claims the woman was sent to disrupt his service — because of some litigation that he’s involved in. He claims the woman was charging at his wife and baby daughter. He says he did what he had to do to keep them out of harm’s way, and that he can prove it with another video.