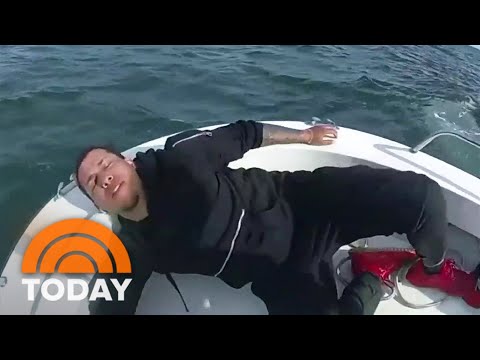 Authorities in Connecticut have released a breathtaking video that shows first responders rescuing two individuals stranded on a capsized boat after locating them through the FaceTime video calling app.

The East Lyme Police Department said it received a 911 call Tuesday afternoon “from individuals aboard a boat which was taking on water in an area thought to be off Millstone Point, in Niantic Bay.”

“While on the phone with dispatchers, the vessel capsized, sending the two individuals into the water,” police said in a statement. “They were then able to climb atop the capsized vessel while awaiting emergency responders.”

Because the two men “had difficulty reporting their location, dispatchers decided to utilize FaceTime in an effort to visualize their surroundings,” the statement continued.

“This decision helped pinpoint their location and the East Lyme Marine Unit, manned by two East Lyme Police Officers and a Niantic Firefighter, arrived and pulled the individuals to safety,” the statement added.

Bodycam footage of the rescue reveals an officer saying, “you guys good?” while giving a thumbs up to the two men standing on the capsized boat.

The boaters are visibly grateful after being brought to safety.

“Can you take this as a souvenir?” one of the men asks as he hands over a chair to the police.