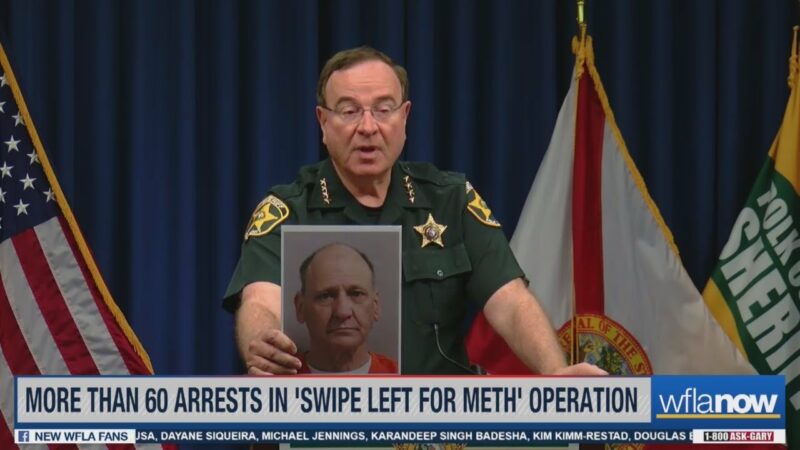 Authorities in Florida that had been working undercover on dating apps such as Grindr and Scruff have made more than 60 drug-related arrests.

The apps which are designed for LGBTQ+ individuals to connect with others have been used to sell methamphetamine, cocaine, Ecstasy, LSD, Fentanyl, and marijuana by using code words and emojis.

The operation, called “Swipe Left for Meth,” started in July when Polk County police were first notified about the apps being used for illegal drug transactions.

“We’ve known for some time that suspects will use the internet and social media to prey upon children online or to engage in prostitution,” the Polk County Sheriff Grady Judd said in a statement, “but this is something we are seeing more and more of in Polk County – suspects who are using dating apps to sell illegal narcotics.”

The investigation has led to 159 total felony charges and 72 misdemeanor charges.

During a news conference, Judd said 14 firearms were confiscated during the investigations and arrests.

Authorities emphasized that the suspects who had been arrested were using the platforms specifically to sell drugs and not for dating. “It was clear during the conversations and ensuing undercover drug buys that the suspects’ primary purpose for being on the dating app was to sell drugs – not to find a date,” the Polk County Sheriff’s Office said in a statement.

The dating app Grindr stressed in a statement that selling drugs is prohibited on their applications. “Our moderation team works hard every day to ban bad actors while maintaining the privacy and security of our users,” the company’s Vice President Bill Shafton said.