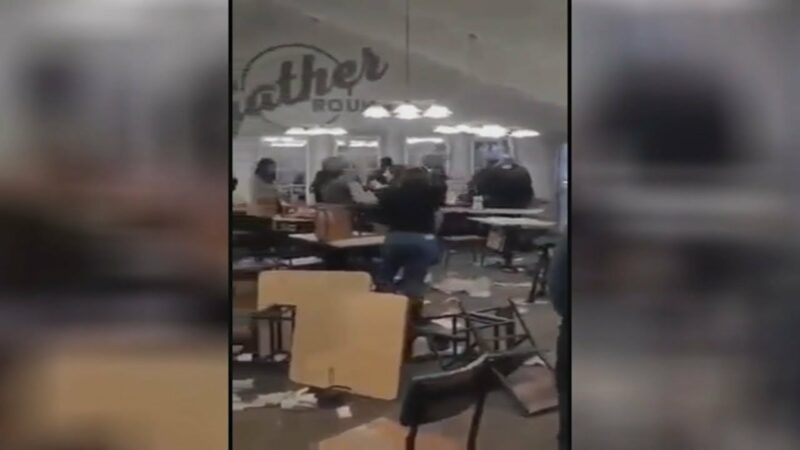 Chairs Were Flying When Brawl Broke Out At Golden Corral

Police are investigating a brouhaha that broke out inside a Bensalem, Pennsylvania, buffet Friday evening.

Customer Alexis Rios said the whole thing started with a steak-related misunderstanding. The customer ahead of Rios was unhappy because his well-done steak was taking longer to prepare than Rios’ rare steak.

People were having a hard time understanding each other due to COVID-19 face masks, which escalated tensions, according to Rios. “With COVID right now, masks and everything, nobody can hear nobody sometimes.”

A video showed a large crowd gathering to see what was happening, many of them shouting over one another, someone can be seen raising a chair above their head, then suddenly people were throwing chairs everywhere.

About half of the crowd cleared out when chairs started flying, but many could be seen throwing punches. People were screaming while employees tried to break up the fight and one woman was throwing food at the brawlers.

Overhead lights were shattered by chairs being hurled across the restaurant. One man in the video can be heard saying “all I wanted was some steak.”

By the end of the three-minute video, the restaurant had been completely trashed with strewn plates, napkins, broken glass, and overturned chairs and tables. A young child can be heard crying toward the end of the video.

The police are actively investigating the incident and have not yet released any details. “I think the video speaks for itself,” Bensalem Township Police Sergeant Glenn Vandegrift said. The incident started with two groups and got completely out of hand but had  “nothing to do with Golden Corral,” he added.

No serious injuries were reported.

Where’s the video? It’s an assumption on my part, but it sounds like niggers, or DemonRATS.

That was uncalled for.

Golden Corral has steaks to die for.