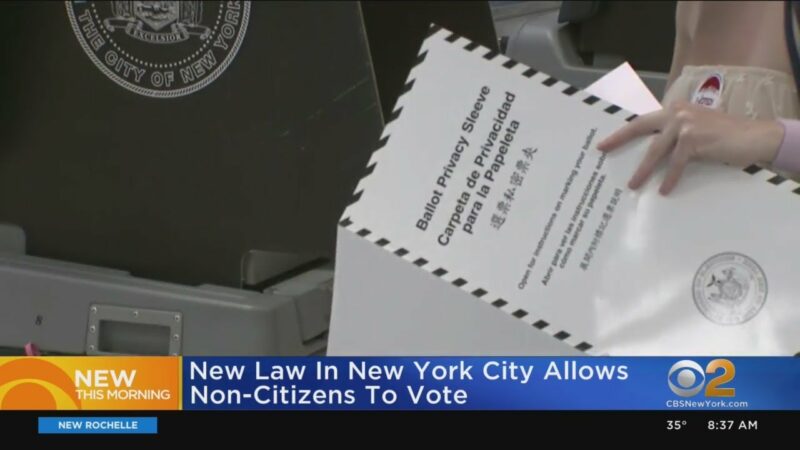 NYC Being Sued For Allowing Non-Citizens To Vote

“American elections should be decided by American citizens,” RNC Chairwoman Ronna McDaniel wrote in a statement announcing the lawsuit. “If Democrats can subvert elections this flagrantly in America’s largest city, they can do it anywhere. The RNC is suing to protect the integrity of our elections, and we stand ready to do the same wherever Democrats try to attack the basic security of your ballot.”

The law is in violation of the New York State Constitution, which stipulates voters must be U.S. citizens, the RNC noted in a fact sheet, adding, “this radical scheme passed by New York Democrats to allow foreign citizens to decide American elections is a blatant attack on election integrity.”

“Anyone reading N.Y. state election law in plain English can see that it prohibits foreign citizen voting,” New York City Council Minority Leader Joe Borelli, who joined the lawsuit, wrote in a statement. “The public should look for themselves at section 5-102 to fully grasp how their city government willfully violates the law without regard.”

“There is nothing more important than preserving the integrity of our election system,” Malliotakis wrote in a statement. “The government should be working to create more trust in our elections, not less. The right to vote is a sacred right given only to United States citizens. This careless legislation violates the state Constitution, dilutes the voices of American citizens, and is not in line with the views of a vast majority of our city.

“We look forward to our day in court.”

The third point was stressed by the RNC for being larger than the margin in the New York mayoral Democrat primary, meaning it is quite possible the deep blue city’s elections could be decided by noncitizens.

“This unconstitutional act cheapens what it means to be a citizen and is an insult to every immigrant who has followed the law, taken citizenship classes, and swore an oath to our nation,” Staten Island Borough President Vito Fossella, who joined the lawsuit, wrote in a statement. “That is why, as promised today we are filing suit to challenge this law.”

New York City is a cesspool run by turds.