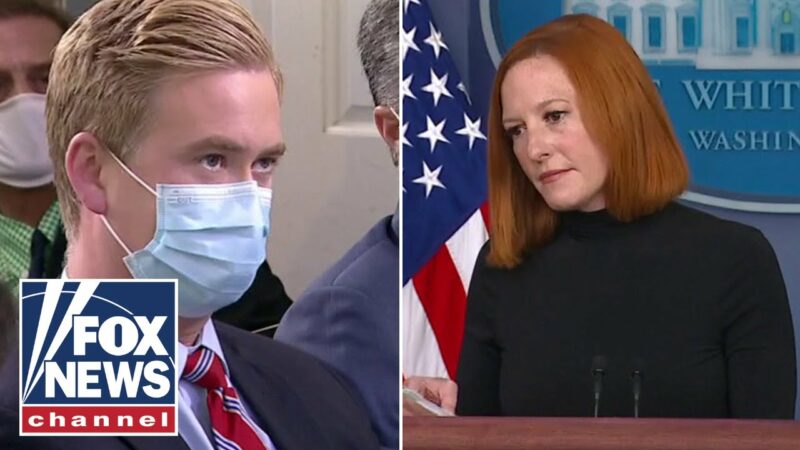 Doocy pressed Psaki on why the administration hasn’t done more to increase the country’s testing capacity ahead of a “winter of severe illness and death,” as predicted by President Joe Biden. He also questions whether Biden would change his messaging to reflect that vaccines aren’t preventing the spread of COVID-19.

When Psaki was asked why the administration was unprepared for an increased need for tests following the holidays, Psaki pointed out new testing sites opened by the administration and the tenfold increase in COVID-19 testing nationwide compared to one year ago.

“There has been a massive surge in cases … there has been an unprecedented demand for tests. So what we have done over the course of the last few weeks, even before that, is the president quadrupled our testing capacity since this summer, we opened 20,000 sites across the country, and we have also opened additional federal sites, including one in D.C. only recently,” she said.

“If you look to a year ago, there were no tests, or maybe one depending on the timeline, that was available on the market. Now we have nine. If you look to about a year ago, there were about 900,000 or maybe slightly higher tests that were being issued every day. Now we’re at about 10 or 11 million. 300 million tests are done in this country every month. So there’s enormous progress being made.”

Doocy pressed Psaki on why the instructions coming from the White House on testing are contradictory to CDC guidance: “The tests you’re talking about though, require people to go somewhere and either make an appointment or wait in line. The CDC’s guidance is if you think you have COVID you’re supposed to stay home,” he said. “You guys said you were gonna mail free tests to people that need them. The president’s there on television talking about a winter of severe illness and death. While he’s saying that publicly, why weren’t you guys doing more to prepare for the winter?

“Everyone decides where they’re going to go get a test,” Psaki answered. “We make a range of options available. You can also purchase tests online.”

Although testing options have increased across the country, it has not met the demand, particularly in areas hit hard by Omicron. People are waiting in lines for hours to get tested at public sites in many major cities, and it can take weeks to get a test shipped home from an online purchase.

“The president talked about a winter of severe illness and death. At the rate you guys are going, these tests are not gonna be available until spring,” Doocy continued. “So will you admit that these free tests you guys promised are not gonna be ready until after the Omicron surge?”

“We’ll start to have tests out the door in the coming weeks, very soon. Again, that’s not the only place people can get tests,” Psaki maintained. “There are a range of ways people can get tests, online, again, you’ll know more about how you can be reimbursed for those tests from here. Go to different sites, there are federal sites opening up all around the country.”

The Omicron surge lasted about six weeks in South Africa before cases started falling. Cases began to surge in the United States in mid-December, and some experts believe the Omicron variant could start to decline by the end of January, based on patterns seen in other countries.

Doocy shifted his questioning to the Biden team’s plan to ship tests directly to Americans via the Postal Service.

“The Postal Service also delivered 98, 99 percent of packages on time in advance of Christmas. And they also, their leaders also have said they’re eager to take on this challenge,” Psaki rebutted. “So we welcome that, and we’re looking forward to working with them to get these tests out to the public.”

The Biden team has continually said that COVID-19 is a “pandemic of the unvaccinated,” but Doocy pointed out that while vaccines make it less likely someone will catch or spread the virus, they clearly can’t prevent it.

“Will the president update his language at some time to be more reflective of the fact that people who are triple-vaccinated are catching and spreading COVID?” Doocy pressed.

“I think the president has said, as have we a number of times, that there will be breakthrough cases, there will be people who get COVID,” replied Psaki. “But there is a significant difference between being hospitalized or dying and being vaccinated with more mild symptoms.”

Psaki skirted the question, saying she wouldn’t comment on the oral arguments at the court over the administration’s vaccine mandates, but that they believe they have a strong legal case.