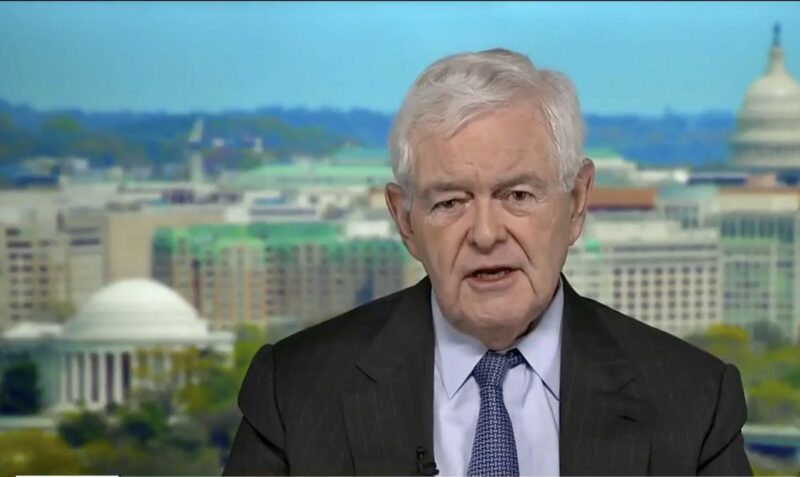 Newt Gingrich Warns: “People Should Really Worry About The Next Three Years”

“We should know after Afghanistan, this is the most timid cowardly and pathetic administration in modern American history,” Gingrich said. “There aren’t any words to express it. If you watch Kamala Harris in Europe, it was an embarrassment to have that person represent the United States because she’s so totally, utterly incompetent. And I think the Europeans have taken our measure. I don’t think anybody in Europe looks to the United States right now to provide any leadership of any kind.”

Gingrich said Biden has not provided “any leadership of any kind,” adding that he believed the U.S. could defeat Putin if the country could “unleash” the “competent people” in handling the conflict.

“But instead, we’re intimidated by Putin, we’re allowing him to get away with war crimes. These are all war crimes … It’s beyond words if you’re a serious person to try and describe what a complete, utter embarrassing failure Biden is,” he continued.

“This is not who we are,” host Harris Faulkner replied. “We’re not weak, we’re not.”

Gingrich agreed that the country is not weak but noted the president is currently attempting to buy oil from Venezuela, Iran, and Saudi Arabia rather than increasing domestic oil production.

“You can’t be nuttier than this administration,” Gingrich continued. “It combines cowardice and crazy ideas into a really dangerous, historically threatening model. People should really worry about the next three years.”

The president imposed sanctions on Russia following the invasion of Ukraine and announced a ban on all imports of Russian oil and gas on March 8. The administration has received criticism from some lawmakers for not doing enough to aid Ukraine, particularly after the State Department declined to send Polish MiG jets to Ukrainians from an airbase in Ramstein, Germany.

Vice President Kamala Harris received a wave of backlash for her embarrassing behavior during a joint press conference Thursday alongside Polish President Andrzej Duda when she inappropriately burst out in laughter.