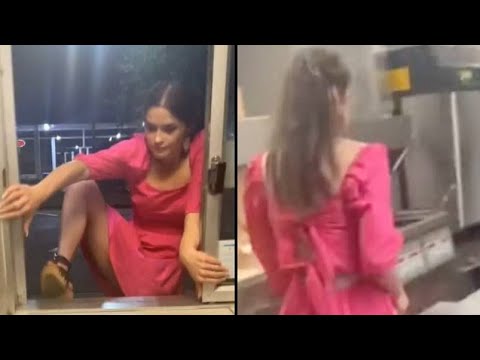 Woman Climbs Through McDonald’s Window To Get Her Burger Fix

A woman dressed in a pretty pink dress and high heels was so desperate for a Mcdonald’s fix that she climbed through the drive-thru window and pleaded with staff to help her fire up the grill.

Disappointed to hear that restaurant staff couldn’t prepare her order because they’d run out of food handling gloves, the woman crawled through the drive-thru window and declared, “It’s my first-day training and I came inadequately dressed.”

Staff couldn’t contain their laughter as the woman wandered around the kitchen, clapping her hands in glee.

The clip was shared by TikTok user GreerGreer who explained: “Lady climbs thru McDonald’s window because we’re not taking any more orders CAUSE we have no gloves.”

They added: “She’s not playing, she wants to make her own food” and the post quickly garnered more than a thousand comments, with many social media users calling her a stone-cold legend.

One person wrote: “She is an icon,” while another added: “OK but she actually looks funny to hang out with.”

“She looks kinda fun tho,” echoed a third. A fourth person called the woman a ‘girl boss’ and a fifth gushed: “So funny! She seems like a good time.”

Another social media user wrote: “Nah, that was entitlement. I would’ve called the cops. If a business is closed, it’s closed.”

“The audacity and entitlement though,” said another TikToker, while a seventh added: “It’s not right to do that.”