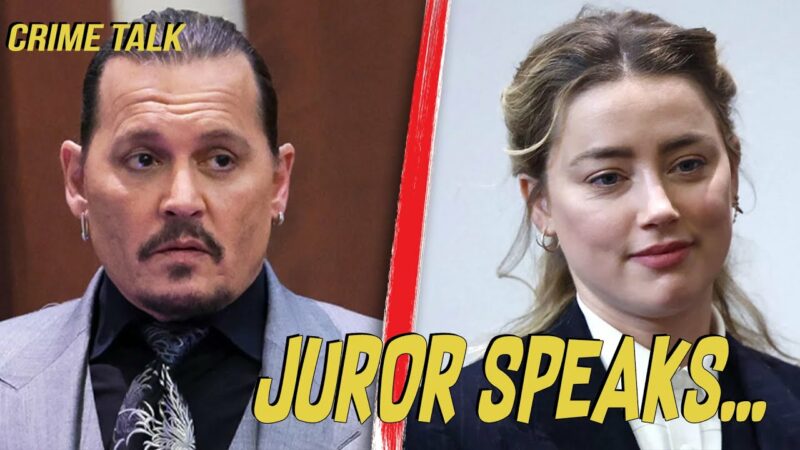 A juror in the Johnny Depp and Amber Heard defamation trial said in a recent interview that when she cried while testifying, the jury saw only “crocodile tears.”

“It didn’t come across as believable,” the juror who asked not to be named, said. “It seemed like she was able to flip the switch on her emotions. She would answer one question and she would be crying and two seconds later she would turn ice cold. It didn’t seem natural.”

Depp, on the other hand, “just seemed a little more real in terms of how he responded to questions.”

Heard’s credibility was suspect throughout the trial, the juror said.

The jury concluded that “they were both abusive to each other,” but Heard’s team failed to prove Depp’s abuse was physical.

“They had their husband-wife arguments. They were both yelling at each other. I don’t think that makes either of them right or wrong. That’s what you do when you get into an argument, I guess. But to rise to the level of what she was claiming, there wasn’t enough or any evidence that really supported what she was saying,” he said.

The jury considered Heard to be the aggressor in the relationship. “If you have a battered wife or spouse situation, why would you buy the other person, the ‘aggressor,’ a knife? If you really wanted to help Johnny Depp get off drugs, why are you taking drugs around him?” he asked.

Heard testified she had given Depp a large knife as a gift, which Depp’s legal team presented to jurors.

Photographs that Heard took of Depp also fell flat. The defense used them to show Depp’s state after a drug or alcohol binge, but they failed to make an impact, he said

“If you mix alcohol and marijuana, that’s where you usually end up — passed out,” he said. “We discussed at length that a lot of the drugs she said he used, most of them were downers. And you usually don’t get violent on downers. You become a zombie, as those pictures show.”

The photos that Heard’s team presented purported to show bruising on her face also came into question. The jury believed one photo had been edited to suggest bruising on Heard’s face. Heard testified the photos looked different because of a “vanity light.”

“Those were two different pictures. We couldn’t really tell which picture was real and which one was not,” the juror said.

The juror also said the defense tripped up by telling them that the actress “never goes outside without make-up on,” he said. “Yet she goes to file the restraining order without make-up on. And it just so happens her publicist is with her. Those things add up and start to become hard to believe,” he said.

The juror said the four-hour debate over the difference between a pledged donation and an actual donation ended up “a fiasco” for Heard. Heard testified she never donated all $7 million from her divorce settlement to two charities because she didn’t want Depp to reap the tax benefits by sending her settlements to the charities directly.

The actress testified that a pledge and a donation are “synonymous with one another” and “mean the same thing.” The jury was shown a video of Heard on a Dutch talk show saying she gave her donation to the charities.

The fact is, she didn’t give much of it away at all,” the juror said. “It was disingenuous.”
Subscribe
Login
0 Comments
Inline Feedbacks
View all comments
Previous Post
Next Post