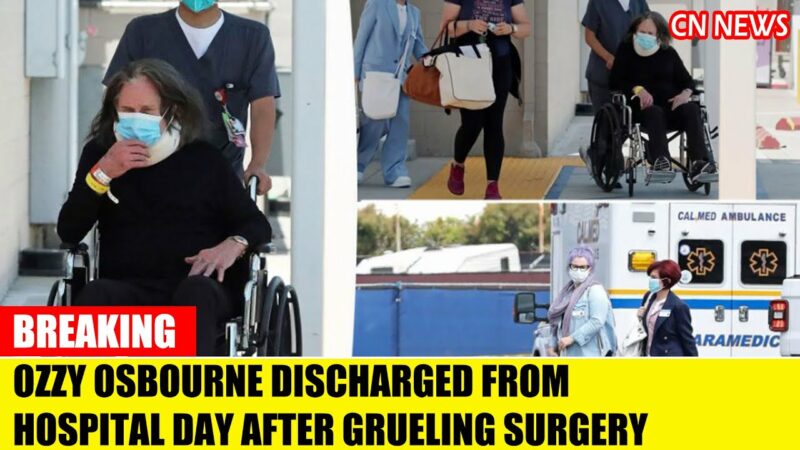 Ozzy Osbourne thanked his fans for “their thoughts, prayers and well wishes” following the “major operation” he had on Monday afternoon.

“I am now home from the hospital recuperating comfortably,” Ozzy tweeted to his millions of followers on Wednesday.

“I am definitely feeling the love and support from all my fans and send everyone a big thank you for their thoughts, prayers, and well wishes during my recovery.”

The family has been private about the medical procedure Ozzy had to undergo, but Sharon said Ozzy was “feeling good” roughly 30 minutes before her husband posted online.

“Our family would like to express so much gratitude for the overwhelming amount of love and support leading up to Ozzy’s surgery,” she tweeted Tuesday afternoon.

“Ozzy is doing well and on the road to recovery. Your love means the world to him,” she added.

Sharon indicated last week that Ozzy would be having a difficult surgery. She immediately flew back from London to be by his side.

“He has a major operation on Monday, and I have to be there,” she told her fellow TalkTV panelists last week. “It’s really going to determine the rest of his life.”

The procedure was to remove and realign pins in his neck and back. “Ozzy is 73 and any kind of surgery when you get older is difficult,” a source said.

“This is quite major. He’s having the pins in his neck and back realigned from when he had a fall back in 2019.”

“He’s been in a lot of pain,” the source noted of Ozzy’s physical condition as of late and will also require a “lengthy amount of convalescence” with round-the-clock nursing at home

Ozzy’s back problems stem from the all-terrain vehicle collision in 2003 where he flipped his quad while riding around his London property.

He had to undergo emergency surgery for “a broken collarbone, eight fractured ribs that were pinching crucial blood vessels and damaged vertebrae in his neck.”

“I’m just waiting on some more surgery on my neck,” he told Classic Rock magazine in May. “I can’t walk properly these days. I have physical therapy every morning. I am somewhat better, but nowhere near as much as I want to be to go back on the road.”

When asked if he ever considered his mortality, Ozzy said he felt optimistic about his future as he looked back on the past.