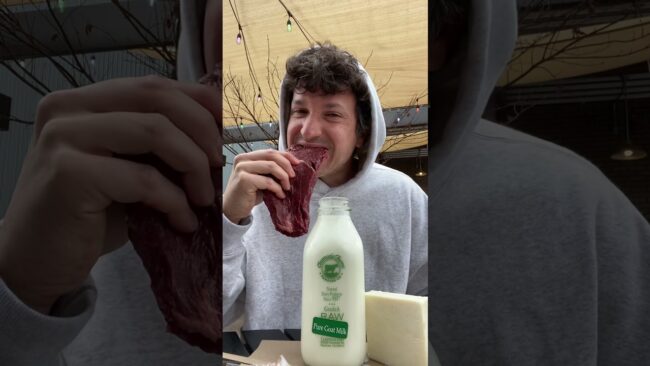 Instagrammer “John” claims that he has eaten nothing except raw meat for the past 167 days and has boldly written “seeing if I live for 5 days or 500 years” on his widely followed Instagram account @rawmeatexperiment.

John’s 144,000 followers have been part of his raw meat-eating journey. “Eating raw meat at Whole Foods every day until I die from bacteria,” is written on his bio. John claims to have started his extreme diet for health reasons. He said he also gets a kick out of consuming much of his raw meat diet at his local Whole Foods. “It’s funny to do it in front of people,” he posted in an Instagram highlight.

John’s raw-meat-eating binge began on Nov. 22, 2021, and his posts read much like a storyboard of various and very raw meals that he photographs, videotapes and shares with his fans and followers.

He often makes jokes about his extreme eating habits by posting memes to his Instagram with captions such as, “the worms in my meat coming to live in my body,” alongside an image of worms strewn across a wet sidewalk.

John’s page is not one for the weak-stomached. Many images and videos show him as he takes bites out of raw meat and details his experiences. He featured “Ocean bug Friday” on April 22, and recorded himself chowing down on some raw seafood, with a long caption that described his experience. “The word meat comes from the Old English word mete, which referred to food in general. Also in our English, it is Me – Eat. I think that explains enough that our natural diet is probably corpse-based,” he wrote.

His April 12 post includes a video of him eating raw veal brain, followed instantly by a series of comments from viewers who found the video very difficult to watch. “Are you suffering from long-term effects of covid 19 that make it impossible for you to taste and smell? That’s the only explanation I can think of for this,” wrote one shocked follower. Other viewers cheered him on, with comments such as, “the brain looks really soft in texture, like a muffin.”

John’s March 29 meal was captioned with, “a bag of shredded cow. My favorite meal still.”

Day 167 of John’s all raw-meat diet shows a video of him eating with the caption, “The sun is shining and I’ve got some juicy nuts in my mouth, what could I possibly have to complain about?”