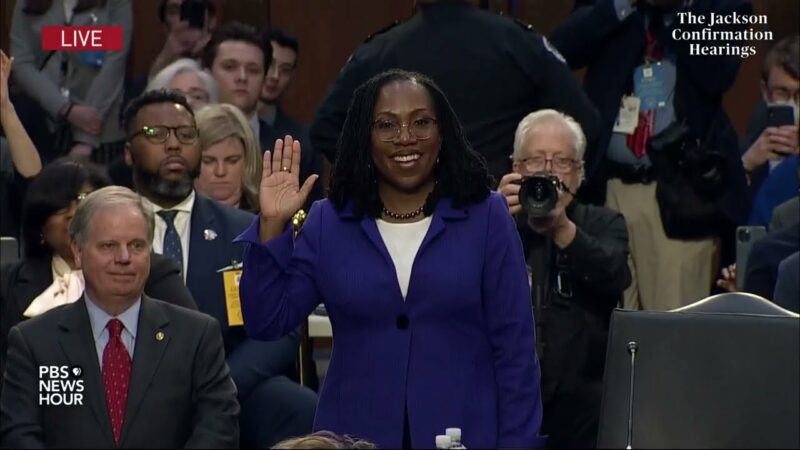 A group of House Republicans sent a letter Monday to the leaders of the Senate Judiciary Committee, calling on them to launch a full investigation into President Joe Biden’s Supreme Court nominee Ketanji Brown Jackson’s past rulings as a judge, saying she showed leniency toward those who committed sexual crimes against minors.

The letter which was spearheaded by Colorado Rep. Ken Buck and signed by 18 other House Republicans, was sent to Senate Judiciary Committee Chairman Sen. Dick Durbin and Ranking Member Sen. Chuck Grassley. In it, the House Republicans call on the committee to investigate three child pornography cases from when Jackson was Vice-Chair of the U.S. Sentencing Commission.

The letter names the three cases specifically and says “for every child pornography case in which Judge Jackson has ruled and for which records are available, she deviated from federal sentencing guidelines in favor of the offenders.”

The Three Cases Highlighted In The Letter:

“Judge Jackson’s pattern and practice of leniency on sentencing for child sex crimes is deeply troubling. Her record of special empathy towards criminals is the fulfillment of Democrats’ soft-on-crime, defund the police movement that has caused a spike in crime across the nation,” Buck argued.

In the case of U.S. v. Hawkins, “Jackson sentenced the perpetrator to only 3 months in prison” when the “Sentencing Guidelines called for a sentence of up to 10 years,” Hawley said. “This goes beyond ‘soft on crime.’ I’m concerned that this a record that endangers our children,”

White House press secretary Jen Psaki disputed the claims Thursday, arguing that Jackson’s sentencing of sex crimes have all been “consistent” with the recommended sentences.

Psaki said Hawley “took a snippet of a transcript out of context” when Jackson was repeating a witness’ remarks.

“This is toxic and weakly-presented misinformation that relies on taking cherry-picked elements of her record out of context — and it buckles under the lightest scrutiny,” White House deputy press secretary Andrew Bates said in response to Hawley’s accusations.

Grassley said he and Senate Republicans will be investigating all of Jackson’s decisions and statements.

“My colleagues in the House have every reason to be concerned about leniency provided to those involved in crimes against children. These are concerns I share and they’ll be the subject of very legitimate questions from all of us,” Grassley said.

“In the next few days, we’ll use information from my office’s exhaustive review and investigation of every one of Judge Jackson’s decisions and statements on the matter to question her. It’s a shame that the White House and my Democratic colleagues continue to stonewall on records related to the judge’s tenure on the Sentencing Commission, which might shed some light on these preferences,” he added.