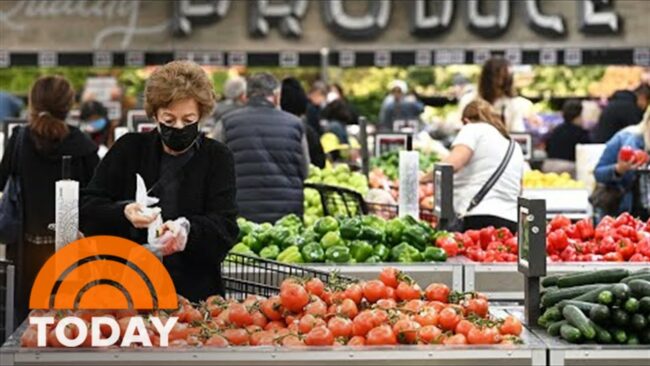 As Russia continues its assault on Ukraine, Americans are feeling the squeeze at the grocery store as a result of the conflict.

It began with a spike in gas prices and now, with Russian oil banned in the United States experts say shoppers can expect their grocery bills to continue to rise.

“It comes an absolutely horrible time for American consumers because we’re looking every day at inflation almost reaching 10%,” Dan Varroney, a supply chain expert and founder of Potomac Core, said. “Last month’s figures were close to 8%. And that means that consumers, including those that are living paycheck to paycheck, are going to pay more for food.”

The resources in short supply such as natural gas, crude oil, wheat and seed oil, will impact the cost of doing business for food manufacturers at home.

“Everything from getting food from the ground to producing it, to storing it, to delivering, it all involves energy,” Varroney said. “Natural gas is utilized to manufacture those foods. Then when you get past that? And you get into logistics, you’ve got a store, these food products, so there’s gasoline to ship and there’s electricity to store.”

“It’s energy costs that are going to choke consumers at every level as food companies need to stay competitive.”

The baking industry in particular is being affected. With wheat as a primary ingredient and natural gas used for large-scale industrial ovens, bakers are dealing with the rising costs of doing business.

Robb MacKie, the president and CEO of the American Bakers Association (ABA), said bread makers are starting to feel the pinch of higher demand on their inputs.

“A lot of ingredients come out of Ukraine, particularly wheat, oilseeds, barley and a number of other crops,” MacKie said. “The challenge is that that [region] is one of the top three wheat-growing areas of the world. And if we’re taking that out of production, which it looks like if the conflict goes much longer, that is going to happen. That’s going to have a significant impact on the price of U.S. and Canadian wheat, which is what U.S. bakers primarily use.”

The reason prices are up, is because of asshole Joe’s policies. Has not thing one, to do with the war.