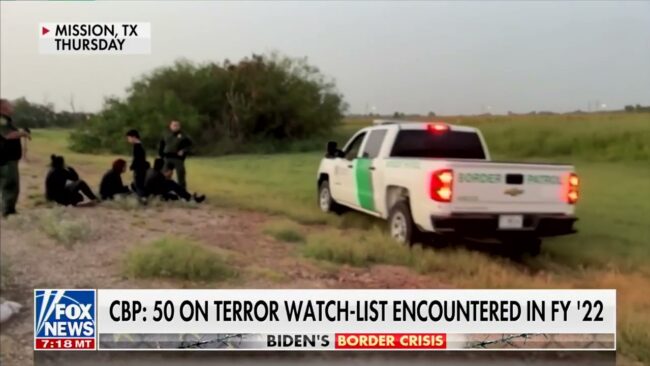 U.S. Customs and Border Protection (CBP) apprehended 15 illegal migrants on the FBI’s terror watchlist at the U.S-Mexico border in May.

Authorities encountered 239,416 migrants in the month of May, a new record for President Joe Biden’s administration, according to CBP data. The number of detained individuals named on the terror watchlist is a record high for any month. The total number of migrant encounters has surpassed 1.5 million in FY2022, according to CBP.

Experts warn the surge in migrants could mean an increase in people added to the terror watchlist. Overall, there have been 50 people on the terrorist watchlist apprehended at the southern border in FY2022, according to the CBP Office of Field Operations.

“The big worry is with the chaos down there, when you have these kinds of people coming to the border, you have to assume that some of them got in,” Todd Bensman, author of “America’s Covert Border War,” he said. His book delves into the ways terrorists take advantage of the U.S. immigration system.

“I’m concerned that the next terrorist attacker is already in the United States because of this administration’s open border policies,” he said.

“So then what is the president’s priority, would it be stopping potential terrorist attacks or letting these migrants come in?” Doocy asked.

“I think as we noted a couple of weeks ago when there was reporting about the number of individuals who were on the watchlist being stopped at the border, that that was the Border Patrol doing their jobs,” she replied. “That was the system working and certainly part of the role of the Department of Homeland Security is to keep our country safe, to keep the American people safe and I think that’s an indication of Secretary Mayorkas’ role to do just exactly that.”

Republican New York Rep. John Katko warned that terrorist groups such as al-Qaida will have the ability to “metastasize” and enter the U.S. in the aftermath of the Taliban’s reconquest of Afghanistan.

“This is a very dangerous situation, and what is most disturbing is that the president was just defiant as hell about his decision – it is clear he didn’t listen to his key military advisors – and he did not talk about the biggest implication of his decision which is an increased threat to the homeland,” he said in 2021.