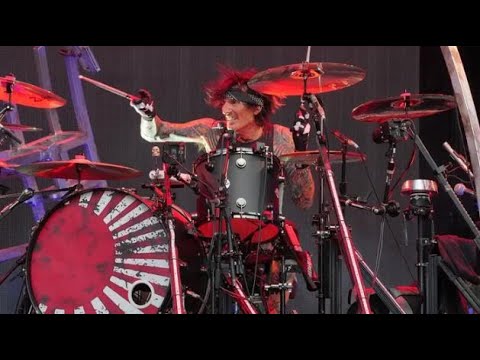 Lee announced he had broken his ribs ahead of the first Stadium Tour show but insisted he would still be able to play.

“But I’ve been resting and healing and even though the doctor tells me I shouldn’t play at all, you know I’m stubborn and I’ll beast through the pain every show for as many songs as I can.”

Lee added: “We’ve all been waiting years for this moment and there’s no way I’m missing this! On with the show.”

The drummer played five songs with the band including “Wild Side,” “Shout at the Devil” and “Too Fast for Love,” according to Ultimate Classic Rock.

The Stadium Tour features Mötley Crüe, Joan Jett, Def Leppard and Poison. The tour was originally planned for 2020, but was delayed due to the coronavirus pandemic.

The tour kicked off Thursday night with a show in Atlanta and is set to run through September 9, with the final show taking place in Las Vegas.

“It’s on! We don’t think we’ve ever looked forward more to kicking off a tour than this one,” Mötley Crüe previously said in a statement. “We can’t wait to finally see all the fans across North America again. Get ready for a wild ride this summer!”

Good thing Tommy is a beast.