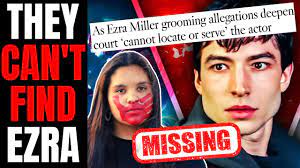 The Flash star Ezra Miller has stirred up much controversy in recent months. Miller was recently arrested twice in one month in Hawaii under charges of harassment and assault. A couple later filed for a restraining order against the actor after he threatened to burn and kill them.

Just recently, the parents of 18-year-old Tokota Iron Eyes filed a complaint to the Standing Rock Sioux Tribal Court to accuse Miller of grooming their child.  Miller was 23 years old and Iron Eyes was only 12 when they met and the parents claim Miller used “violence, intimidation, the threat of violence, fear, paranoia, delusions, and drugs to hold sway over” her.

The court has been unable to locate Miller, but they have responded to the allegations by sharing memes on Instagram.

Miller shared several memes on their Instagram story in response to allegations of grooming 18-year-old climate activist Tokota Iron Eyes when she was a minor.

Iron Eyes’ parents accused Miller of supplying the underage girl with alcohol, marijuana, and LSD, while also using violence to “hold sway” over her.

As courts reportedly try and fail to locate The Flash star, Miller has shared five memes, the first of which carries the text “you cannot touch me, I am in another universe. With The Flash only a year away from theaters, Warner Bros. will have a challenging time marketing the movie and taking Miller on an interview circuit with this kind of baggage on top of them. Unfortunately, with filming complete and The Flash now in post-production, it’s too late to consider replacing the actor.