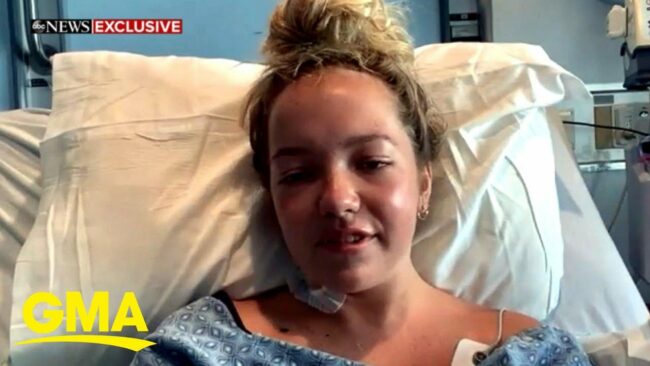 A Florida teen was scalloping with her family off Keaton Beach in Taylor County when a nine-foot shark sunk its teeth into her thigh Thursday afternoon.

Addison Bethea, 17, tried “poking it in the eyes and punching it,” but the shark had its teeth dug deep in her leg and would not let go.

The girl’s brother, Rhett Willingham, who is also a first responder and firefighter, “fought off the shark and pulled her” onto a stranger’s boat.

Willingham wrapped a tourniquet on his sister’s leg to stop the tremendous blood loss from her “massive injury.” He also “kept her awake, ultimately saving her life,” according to a post her father Shane Bethea made online.

Addison was airlifted about 60 miles to Tallahassee Memorial Health Care for emergency surgeries, according to the Taylor County Sheriff’s Office.

The nerve on the back of the thigh was severely damaged, according to a statement her father posted on social media.

“The doctors are unsure at this point as to the condition of the leg and want to take it day by day to see what will have to be done,” he wrote, adding that she was alert by Friday morning.

“She was in good spirits and cracking jokes about beating up the shark,” he said. “The first thing she asked for was a Wendy’s frosty.”

The brave teen is scheduled for another surgery  “to further investigate the extent of the damage to her leg and determine what treatment options are available with the goal of saving her leg.”

“Addison has devastating damage to the soft tissue in her right leg,” according to a hospital statement. “Addison has a long journey to recovery, but she was in good spirits today, surrounded by her family in Tallahassee Memorial’s Pediatric Intensive Care Unit.

Her father asked for prayers and thanked people for “all of the support.”

“She isn’t out of the woods by any stretch, but she is alive and that’s what’s most important to us,” he wrote. “We appreciate all of the support and Addison wanted me to tell everyone Thank You as well.”

This was the first shark attack ever recorded in Taylor County, according to Tyler Bowling, program manager of Florida Museum’s International Shark Attack File, the only scientifically verified shark bite database that covers the planet.