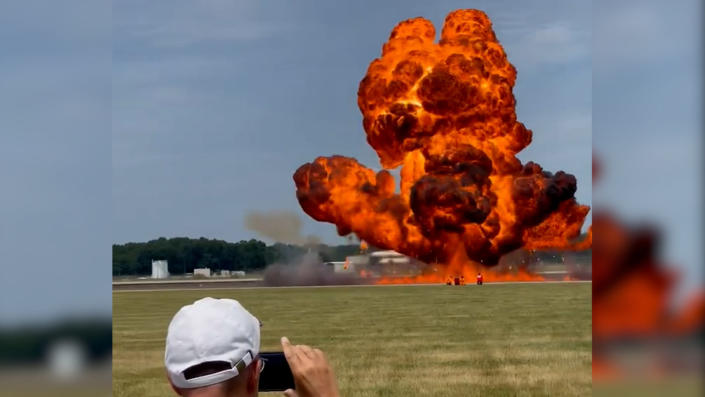 The driver of a jet-powered semi-truck died Saturday when the vehicle crashed in a fiery accident, according to Michigan police.

Chris Darnell, 40, was behind the wheel of the Shockwave Jet Truck when it raced through an explosion and appeared to be in flames, producing a streak of smoke and debris recorded on video.

It wasn’t clear whether the first burst of flames was part of the expected display at the annual Battle Creek Field of Light Air Show and Balloon Festival. The state government’s website promotes the event and notes that it features “pyro and the WALL OF FIRE.”

Two prop planes were performing aerial feats and flying low above the truck as it raced down a runway at the Battle Creek Executive Airport when the accident occurred.

In a post on the Jet Truck Facebook page, Darnell’s father, Neal Darnell, blamed mechanical failure for the accident.

“We are so sad,” Darnell said in the post. “Just one month ago Chris turned 40. He was so well loved by everyone who knew him. Chris so loved the Air Show business. He was ‘Living the Dream’ as he said.”

The truck was created by the late Les Shockley, said to be the pioneer of jet trucks, and operated by the Darnell’s since 2012, according to the International Council of Air Shows. The vehicle was based on a 1985 Peterbilt and powered by three J-34 jet engines, according to the council.

The semi-truck was capable of exceeding 300 mph. Chris Darnell claimed to hold the jet truck speed record, 375 mph, achieved in his team’s Flash Fire jet-modified pickup in 2005 in Florida.

No other injuries were reported following the crash on Saturday afternoon.

Police said organizers canceled the remainder of Saturday’s air show but that other festivities would continue as scheduled through the festival’s end Monday.

Battle Creek police, fire, and the Federal Aviation Administration were investigating the crash and the cause, police said.