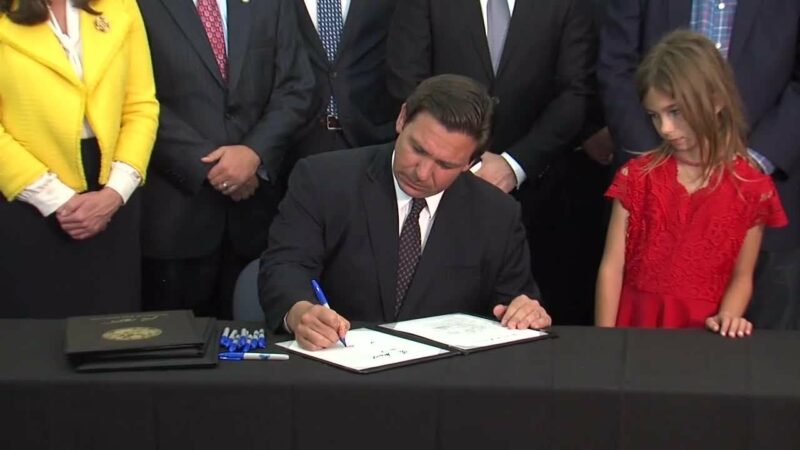 A Florida second-grader who was suspended for not wearing her mask to school was invited to join Republican Florida Gov. Ron DeSantis to speak at his bill signing ceremony Thursday.

DeSantis helped Fiona up to the podium then asked the little girl to tell her story to the audience.

“I wasn’t going to school because I was getting suspended for not wearing a mask,” said Fiona. The crowd responded with cheers and yelled, “we love you.”

“I didn’t like the mask because you have germs on your hands and then you touch it and you put it on your face and you breathe in all those germs,” she continued.

NOW – Florida's Gov. DeSantis lets 2nd-grader, who was suspended 38 times for refusing to wear a mask, speak at his bill signing to stop vaccine mandates.pic.twitter.com/6PhMDBYa2U

DeSantis said that the school has not made Fiona wear a mask since she began telling her story. “She got things done,” said DeSantis.

The school disciplined young Fiona and she was suspended for a total of 36 days for violating the school district’s mask mandate. “Fiona has changed her priorities a bit and is on a mission to take back not only her rights but every American child’s constitutional rights from the tyrant school board,” Fiona’s mother said.

The Florida Board of Education sanctioned Eight school districts in October for implementing mask mandates without options for opting out, in violation of an executive order.