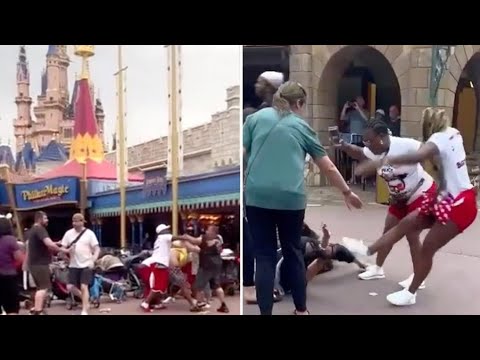 A dispute between two families who were waiting in line at Disney World took an ugly turn on Wednesday when a confrontation escalated into an all-out brawl.

Somewhere in Fantasyland between Cinderella’s Castle and Peter Pan’s Flight, the opposing families threw punches and cursed one another, as onlookers screamed in the background. The brawl continued for several minutes before park security and deputies broke it up.

“We came upon it, and it appeared as though it took about two minutes for two security personnel to arrive. Deputies arrived probably about five minutes after that,” an eyewitness said.

The altercation began when a woman waiting to get into Mickey’s Philhar Magic realized she had left her phone on her electric conveyance vehicle and left the line to get it, while her family remained. When she returned, another family tried to block her from rejoining her group. Her family then waited outside the theater and confronted the other group.

“We don’t appreciate you guys pushing my younger sister,” one of them said to the other family.

The confrontation devolved into a shouting match and then a physical altercation before security and law enforcement got involved.

One of the men was transported to the hospital with a facial laceration with others suffering smaller bruises.

This is not the first fight at the Disney park this year. In May, a woman suffered from bleeding on her brain after hitting her head on the ground during a fight she and her husband were involved in with other park guests as they tried to position themselves before a fireworks show.