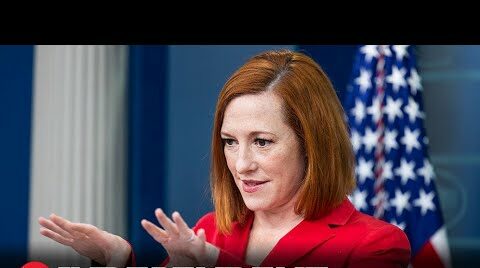 Doocy Squares Off With Psaki Over Gas Prices

White House press secretary Jen Psaki went back and forth with Fox News White House correspondent Peter Doocy over the rising costs of gas at a Monday press briefing.

Doocy pressed Psaki on the administration’s response to the average gas price hitting $4.104 per gallon on Monday, a record high for the U.S. The cost continues to surge as the U.S. still imports Russian oil despite the crisis in Ukraine.

“It sounds like you guys are blaming Putin for the increase in gas prices recently, but weren’t gas prices going up anyway because of post-pandemic supply chain issues?” Doocy asked.

“I think there’s no question that as we have seen, and outside analysts have conveyed this as well, the increase and the anticipated continued increase…that is a direct result of the invasion of Ukraine, and also there was an anticipation of that that was factored in as gas prices have gone up,” Psaki replied.

“To be very clear, federal policies are not limiting the supplies of oil and gas to the continent—let me finish,” Psaki replied, as Doocy pushed back. “Let me finish.”

“Let me give you the facts here and I know that can be inconvenient but they’re important at this moment,” Psaki continued. “To the contrary, we have been clear that in the short term supply we must keep up with the demand. We are adhering around the world that we make the shift to secure a clean energy future.”

She insisted the U.S. has produced more oil at “record numbers” and continues to do so, claiming there are 9,000 drilling permits that are currently not being used.

Doocy then asked whether Biden would consider reversing his executive orders that stopped new federal leases for oil and gas companies to drill and revoked the construction of the Keystone XL Pipeline, which intended to carry over 8,000 oil barrels from Canada to the U.S.

“Well, 90% of them happen on private lands, as I’m sure you know. And there are 9,000 unused, approved drilling permits. So I would suggest you ask the oil companies why they’re not using those if there’s a desire to drill more,” she said. “Are you suggesting that Keystone would solve the gas prices issue?”

The press secretary argued that the president reversing his decision on Keystone would not impact prices faster than shifting the country away from dependence on fossil fuels.

Doocy pressed her on how high gas prices will have to reach before Biden sets aside his “ambitious climate goals” and temporarily raises domestic oil production. Psaki answered the U.S. produced more oil throughout the past year than in former President Donald Trump’s first year.

“I think you’re misidentifying what the actual issue is,” she told Doocy.

“What is the White House, what is the president’s message to Americans who are going to the gas stations today and seeing prices so high?” CBS senior White House correspondent Ed O’Keefe asked.

Psaki said Biden’s message is that he is doing “everything he can” to decrease the burden of high prices on the American people. She said that Russia’s invasion of Ukraine created “instability” in global markets and that the administration has taken steps to reduce prices and “mitigate the impact.”