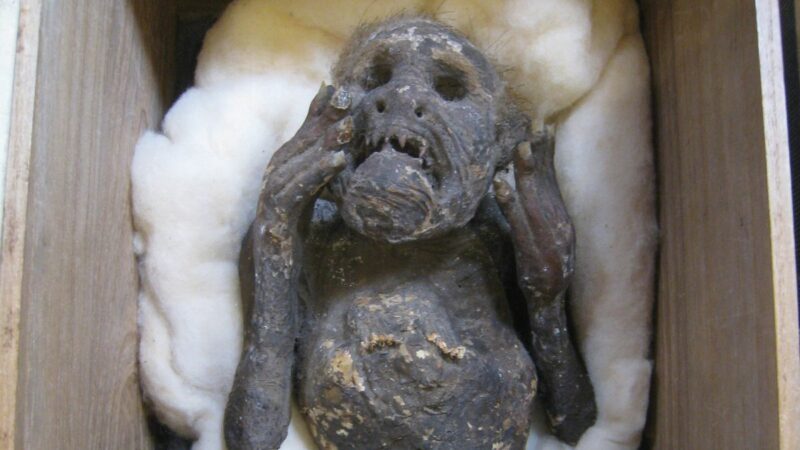 A mummified “mermaid” that according to legend grants immortality to whoever tastes its flesh, will be studied by scientists looking to disprove the wives tale and find its true nature.

The creature was said to have been caught in the Pacific Ocean, off the Japanese island of Shikoku, between 1736 and 1761, and is currently housed in a temple in the city of Asakuchi.

The creature has a contorted face, razor-sharp pointed teeth, and a fish-like lower half complete with a tail. Nevertheless, the mummy also has human features such as two hands and hair on its head and brow.

Researchers from the Kurashiki University of Science and the Arts have taken the mummy for CT scans in hopes of unraveling its mysteries.

Hiroshi Kinoshita of the Okayama Folklore Society, who’s spearheading the project, said the mummy could have religious significance.

“Japanese mermaids have a legend of Immortality, he said.

It is said that if you eat the flesh of a mermaid, you will never die.

This ‘Yao-Bikuni’ legend is also preserved near the temple where the mermaid mummy was found. “I heard that some people, believing in the legend, used to eat the scales of mermaid mummies,” Kinoshita added.

In the age of COVID-19, a mermaid could be a grim omen according to folklore.

“There is also a legend that a mermaid predicted an infectious disease,” cautioned Hiroshi.

A historic letter dated 1903, written by a former owner stored with the mummy tells of its origin.

“A mermaid was caught in a fish-catching net in the sea off Kochi Prefecture,” the letter states.

The fishermen who caught it did not know it was a mermaid, but took it to Osaka and sold it as an unusual fish.

“My ancestors bought it and kept it as a family treasure.”

It’s unknown how or when the mummy came to the Enjuin temple in Asakuchi.

According to the chief priest, Kozen Kuida, it was put in a glass display case 40 years ago and is currently in a fireproof safe.