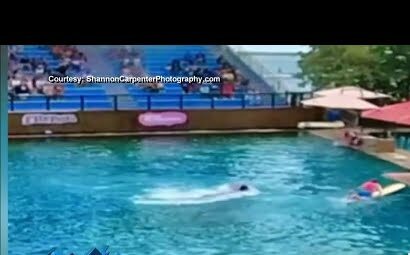 The 23-year-old dolphin named Sundance broke from its routine and attacked its trainer mid-show Saturday afternoon. Photographer Shannon Carpenter captured the attack in a video that shows exactly when Sundance turned on the trainer.

The video was posted to TikTok, where it has amassed more than 500 shares.

The trainer can be seen struggling to get out of the pool before being dragged by the dolphin, her head disappearing for a short time beneath the water. When the visibly shaken trainer managed to get out of the water, she was taken by ambulance for treatment.

Dolphins can swim at speeds of up to 18 miles per hour and use their snouts to attack sharks in the wild, according to the Whales and Dolphins Coalition.

The U.S. Department of Agriculture had accused the Seaquarium of a number of animal rights violations in a report in 2021. Past incidents at the facility include feeding animals rotten fish and housing an orca whale in a dilapidated tank.

“This was an uncomfortable interaction for both of them and the dolphin reacted by breaking away from the routine and striking the trainer,” Seaquarium said in a statement. “As a precaution, Miami-Dade County safety authorities were contacted. Our family extends to include the animals in our care, our team members and our guests. While there is no apparent serious injury, careful watch and follow-up evaluations will ensure the best care for all.”