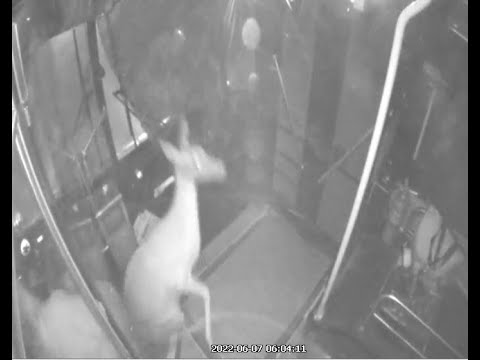 Bus Driver Keeps It Together As Deer Crashes Through Windshield

A city driver in Oklahoma got a surprise on her morning route when a deer crashed through the windshield.

City officials in Lawton said the driver, Alisha Sutton, had only been on the job ten months at the time of the incident.

The city released a video of the crash, showing the deer standing up and Sutton calmly opening the door to let it back out.

“I was like, I guess I gotta slow this bus down,” Sutton said. “I slowed it down and brought it to a stop right there in the road. And I wanted to get her off the bus. I was afraid it was going to try to run to the back of the bus and get hurt, try to escape that way.”

The driver said she immediately called dispatch after letting the deer off the bus.

“Ma’am, a deer just jumped through my window,” Sutton told the dispatcher. “It was on the passenger side – it got stuck on the bus. I opened the door and it jumped out.”

The general manager of the Lawton Area Transit System, or LATS, praised Sutton for her actions.

“I was very happy to see how our driver handled the situation,” Ryan Landers said. “She was very cool, calm, and collected. She did not panic, she did all the right things that you’re supposed to do on the safety side of things and ironically, on the customer service side of things.”

City leaders said LATS bus drivers go through no less than four weeks of training. Sutton said she had been driving for 20 years, including her 10 months with the local transit system.

“I was a truck driver, school bus driver, safety coordinator, driver trainer,” she continued. “I’ve had a lot of training and safety things going on in my life. The main thing was slowing the bus down, keeping it steady, don’t break or swerve just slow down and bring the bus to a stop as safely as you can.”

Sutton said a plexiglass door is closed off to the rest of the bus. She added that if the deer had jumped a few seconds sooner, it could have landed on her side.

Why are your videos partially blocked on the right hand side of the screen by a list of posts?