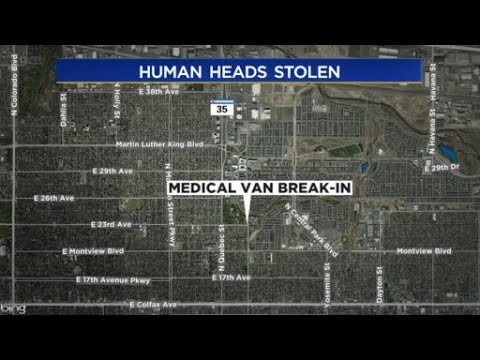 Box Of Human Heads Stolen From Freight Truck In Denver

In a particularly disturbing robbery, a box of human heads was stolen from a freight truck in Denver Sunday.

Police said the box of human heads was stolen from a freight truck that was parked on East 23rd Avenue. The theft occurred sometime between 2:30 p.m. Wednesday and 9:30 a.m. Thursday.

The words, “Science Care” were prominently printed on the side of the box. Science Care is an organization where people can donate their bodies for scientific research and education. The box was clearly labeled as an “Exempt Human Specimen.” The heads were intended to be used for medical research.

Isaac Fields said the discovery was “pretty shocking,” though it was possible the heads were being used for research.

“I guess I don’t see too many strange things happening around here usually, but you know you never know,” Fields said.

“Well, my wife actually does Ph.D. research at the University of Colorado Anschutz,” he explained. “So cadavers are definitely utilized in certain situations. And I’m assuming that was probably the case.”

It’s unclear whether the suspect knew what the box contained at the time of the theft.

A public information officer for the Denver Police Department said that police are “working on gathering more information about the case, identifying the suspect or suspects, and recovering the stolen items.” Additionally, anyone with tips about the case can contact Metro Denver Crime Stoppers. No arrests have been made at this time.

Anyone who finds the box of human heads is encouraged to call the police.