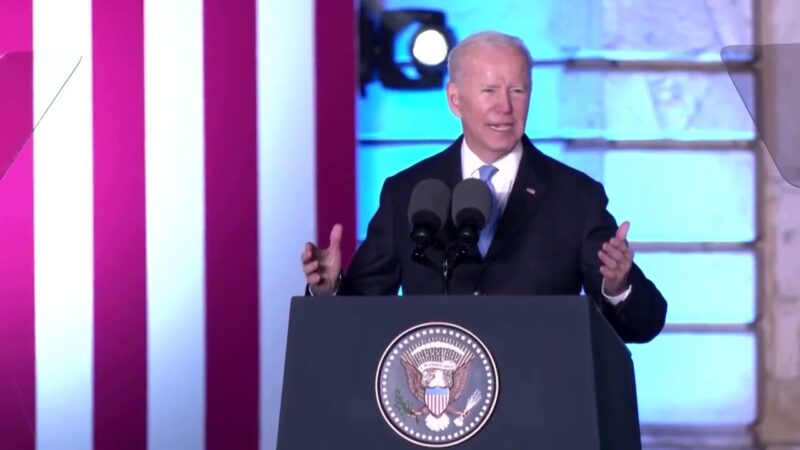 President Joe Biden called for a regime change in Russia while delivering a speech to NATO allies in Poland Saturday, to encourage them to stand against the ongoing Russian invasion of Ukraine.

“A dictator bent on rebuilding an empire, will never erase the people’s love for liberty, Biden said of his Russian counterpart, Russian President Vladimir Putin. “Ukraine will never be a victory for Russia, for free people refuse to live in a world of hopelessness and darkness.”

For the entirety of the crisis in Ukraine, Biden has insulted Putin, calling him a “murderous dictator” and a “war criminal,” but unlike other prominent politicians, he had never called for Putin’s removal from power before.

A White House official has since tried to walk back Biden’s statements saying that Biden “was not discussing Putin’s power in Russia, or regime change, but was instead insisting that Putin “cannot be allowed to exercise power over his neighbors in the region.”

This is the second major gaffe that Biden had made during this European trip.

On Friday, Biden told US troops stationed in Poland that they would witness the bravery of the Ukrainian people “when you’re there,” suggesting that American troops would be deployed to Ukraine.

The New York Post reported that Biden said, “You’re going to see when you’re there, and some of you have been there, you’re gonna see — you’re gonna see women, young people standing in the middle in front of a dammed tank just saying, ‘I’m not leaving, I’m holding my ground.’”

The White House quickly clarified that Biden had misspoken and that the president was not, changing his stance on deploying the military into Ukraine.

What does Biden know about liberty? He’s ruling by executive fiat! (dictator)